Arecibo Observatory in Puerto Rico was the world’s largest single-aperture telescope from 1963 until 2016 when China built a bigger one. Sound is what its great disk caught. Pulsars, ice on Mercury’s poles, the quasar 3C273’s brightness temperature at greater than 1013 K. Wonders for scientists who knew details of what they meant.

It was revered, busy, important in its day. In 2020 supporting cables began to snap. The final titanic smash came on December 1, 2020. The 1000 foot disk was hit by a falling observation deck, cracked and crumbled into itself.

What struck me most was the soundtrack. The way the destruction kept going on, pieces giving way.I so regret the sound was cut short bwforemsilence returned.

They say no human life was lost, but was no islander beneath the disk that had become familiar, existing there placidly for a generation or more? Nor in that teeming jungle no parrot, jaguar, tapir killed, broken, traumatized?  In Medieval times the theory was that humans sat supremely atop a pyramid of other animals, the less humanoid splayed out near the wide bottom. In some ways we still believe this.

There is a strange way that non-living things can become dear to us. I had read enough about Arecibo to feel it was a permanent feature of my world. And now it’s gone in an echoing cascade of roars. You’d think the catastrophic film of cables no doubt wider than a man’s arm, giving way to gravity — you’d think an artist would focus on that. But what this artist found the most evocative was the long sound of Arecibo’s dying. 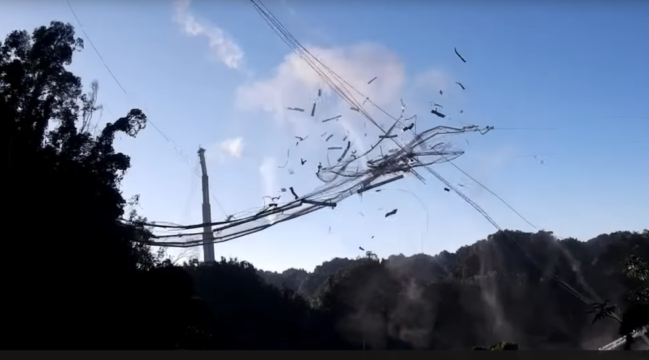 The last moments of the Arecibo Telescope.