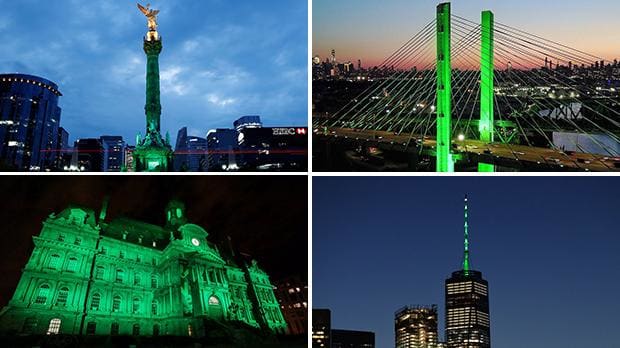 Landmarks aroud the world light up green in protest over Donald Trump pulling out of Paris accord. via the Telegraph.

Buildings around the world lighted in green. What does the ego that stomped the US out of the Paris Accords make of all the greening-up? Or Mr-Heartbeat-from-Being-President who says lefties are making a ruckus out of a molehill. There is such a vast territory of knowledge that this man has not a clue about, to traverse it you’d need camels, dogsleds and an Oz-bound balloon.

Pope Francis stated firmly that “God does not have a magic wand.” Nor do the backward peoples of the Republican Party. They anoint themselves in damn-fool proclamations writ by people waving sparklers as if Gandalf’s staff. When facts disprove them they attack the facts and leave their opinions walled into the cellars of their self-servingness like fine wines.