Medieval accounts tell of riders passing amid long fields until at last they see the spires of Chartres Cathedral begin rising into view. On the brink of nowhere this apparition asserts itself in splendor.  As sublime a teaching as the architecture itself. A revelation.

It’s not possible that the builders failed to anticipate this effect.  At least five other cathedrals had stood on this elevation (each destroyed by fire or war).  How high they rose is not known, but the effect of parallax would preview the architectural vision at some point along the travelers’ road. 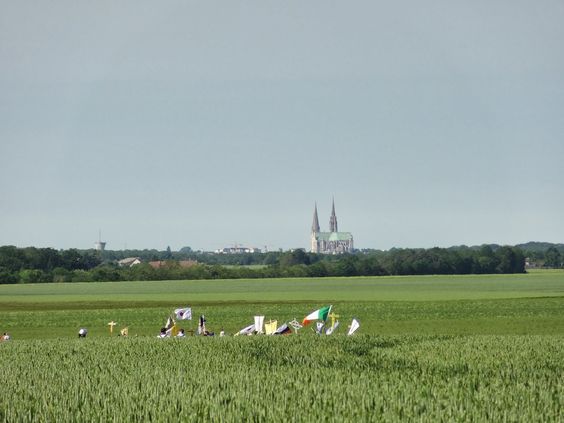 How different in architectural intention from the Egyptian pyramid makers whose massive structures dominate a flat expanse. The tops of the pyramids were clad in gold and would blaze when the rays of sun events (sunset, high noon…) hit them directly. Imagine that experience while your camel train still toils desert miles away.  In years of solar eclipse what prophesies the priests could demonstrate — the sun gets eaten by blackness, then reemerges to light the world again.  Atop the pyramids, darkness then that spark. 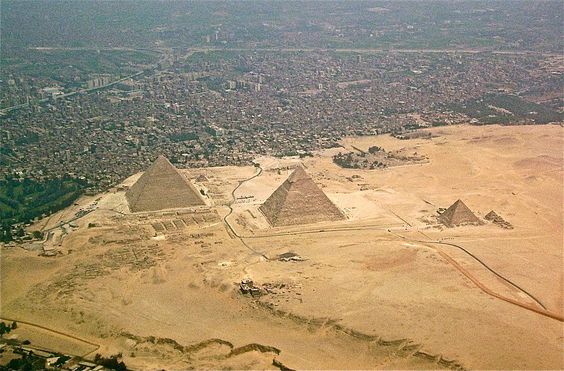 Desert approach to the Giza pyramids. via Wikipedia.

I’ve experienced a solar eclipse only once, standing with a handful of of astronomers on a vast hard-frozen lake. Some feelings are beyond our understanding. I cried.  It was magnificent and I understood the science, yet some atavistic root in me jolted to experience Earth bereft of sun.  Educative to confront that inside your modern self.

While looking into Chartres I encountered the Cult of the Cart.

Throughout European history there have been several documentary accounts of occasions when the public spontaneously came together to labour on some important building project (the earliest being Suetonius‘ account of the rebuilding of the Temple of Jupiter Optimus Maximus in Rome after a fire in AD 70). In medieval Europe, perhaps the most widely known and influential of these events occurred during the building of the Benedictine Abbey at Montecassino (Italy) in 1066. The Abbey’s chronicler, Peter the Deacon, described how a crowd of pious lay people spontaneously seized some heavy marble columns which had been delivered from Rome and carried them up the long steep hill to the building site, singing and praying as they went.

Various historians have said that the Chartres building stones were brought by this means. Carts dragged by pious humans in lieu of oxen — a numinous tale that arrests your attention.  Other historians suggest the Chartres Cult of Carts may be urban legend.  Until we’ve got time travel down pat we won’t know.

Current events have recalled this image. After the government of Michigan created lead poisoning in the city of Flint, 300 volunteer plumbers came to install water filters on residents’ faucets.

The plumbers show how a society might work.  As with old barn-raisings in the US, neighbors far and near come to join in the labor.  Society needs you, you show up and pitch in. 300 plumbers? Who would’ve guessed?

Rapscallion politicians, little surprise.  The wheel of history seems ever in a rut.

Because of that I wonder about what the celebrations were like after the building materials had been dragged to the Chartres site.  Even more than with the 1800s’ barn-raisings there must have been a pause to rest from labor,  a nap beneath carts and trees. Then the festivities. Music, food, intoxicants… laughter, flirting and dancing.  The traditional huffing, puffing and begetting in dark corners.  Songs, too much to eat and drink, sprawled snoring after. 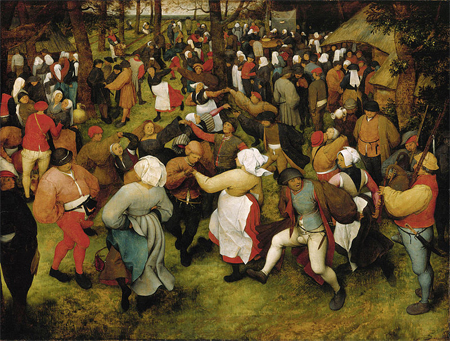 The Wedding Dance (c.1566), oil on oak panel, The Detroit Institute of Arts. via Wikipedia.

I was reminded of the numinous approach to Chartres while investigating the intriguing metalsmith and jewelry maker Brie Flora,   I urge you to investigate her lively imagination.

Tea for Two on an Overnight Train to Beijing

It was 5am as I sat drinking tea on an overnight train from Suzhou traveling to Beijing. I watched cornfields pass outside my window for hours, until out of nowhere, there was a skyscraper. There was nothing between the low, calm, beautiful farmland to prepare you for the large stark concrete building towering above.

by Brie Flora, via brieflora

“atavistic” was a new one on me. Yes, I looked it up. That is a rarity – having to look something up, that is. Thank you for that.

I love you even more for your continuing explorations into humanity, history, and architecture. The way you present the results of the firing of neurons in that profound noggin of yours is always fascinating, intriguing.

Terry thank you again for the warmth of your heart. I usually take “atavistic” as an assessment of character like “knuckle-dragging” as exemplified recently by temporary residents at a bird-watching preserve in Oregon.

Paula, yes that quickening of awareness and bit of thrill when the eye is gifted with sudden beauty. Alas Boston, we crest a hill and see not the Duomo but — the Hancock Building. Ah but there’s the sea beyond…

I am very aware of this experience in two of the places I have lived. Coming from the airport to the city by taxi, there used to be this one turn you take and there would be the Acropolis in the distance. I imagine everything has changed now, but I’m sure it has the same effect.
Also in Italy as the train get closer to the station you can suddenly see the top of the Duomo over the roofs of Florence.
You can kind of get that experience as you top Belmont hill coming in to Boston, too.