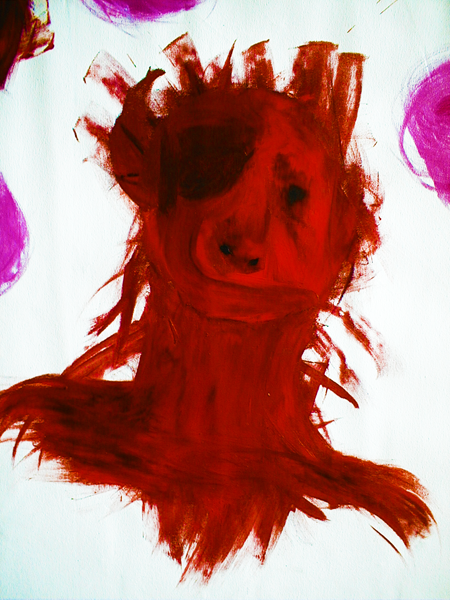 I’ve been searching among my artworks because I can’t articulate in words what I feel about Monday’s tragedy in Boston.  I’ve lived over half my life in and around Boston.  I fly into Logan Airport and hear the old lyric, Boston you’re my home.  I’ve stood along the Marathon route and cheered for nameless runners.  I’ve been crammed in crowds at Boston’s famous Fourth of July concerts and its damn cold New Years’ First Nights.  I’ve walked every single downtown street.  My layers of grief stick together like sheets of plastic wrap.  They cohere: one grief.

When I painted Dogface some 15-20 years ago it began as a sketchy experiment with cadmium red, dioxazine purple and a foam brush.   Then the face emerged and looked me in the eye.  He seems to me to hold a wrenching sadness and an awful inability to speak.   A Greek curse perhaps.

Since the bombs, a flood of words.  Newscasts, hand-scrawled signs among memorial flowers, Facebook posts of courage and grit.  Rumors have been repeated then debunked, shreds of dimly related information have been foisted as real news.  I’ve had to turn off WBUR, a favorite radio station — even they go monomaniacally over and over marginalia, talking, talking, talking.  I need silence to attempt to wrap my heart around this enormity.

When there’s real news I’m eager for it.  Otherwise, can the drumbeat hype.

I regret that Dogface isn’t a better painting, but it’s what I’ve got to share.

My heart is with those who mourn the bitter loss of life or limb, and with the crusty decent folk of Boston.  And with human beings anywhere that the insanity of terror strikes home.  My heart lifts at all the courageous simple heroes who appear in crisis times.

My dear friend, it seems there are many people who have roots in their heart to Boston but whose feet are on other shores. If this horror had happened in Denver or Charlottesville those cities would have rallied too, but because you’ve lived here you understand the flavor of the distinctly Boston mood. Thanks for your warm heart. Hugs, S.