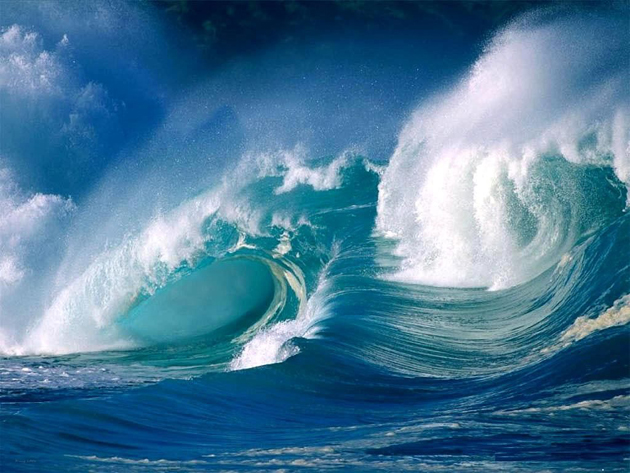 Earth’s surface is about 70 percent water, almost all of it in constant motion.  Tides, currents, roaring rivers, meadow brooks.  Even glaciers creep.  Think of the muscularity, the constant pulse.  Evaporation, rain, all of it is ceaseless, surging, trickling, wicking back into air — while we fret and brush our teeth.

Simultaneously, animals are massively migrating across continents, between continents, through oceans, in thin air.  Another tremendous splurge of energy that goes on without humans.   Indeed the photo below is from a part of the world torn by human violence.  Despite our ravages, alongside them, pour the annual migrations of white-eared kob. tiang antelope, Mongalla gazelle and zebra.

Imagine an urgent mass of 1.2 million moving animals that stretches 50 miles long and 30 wide.  A journey of 930 miles. 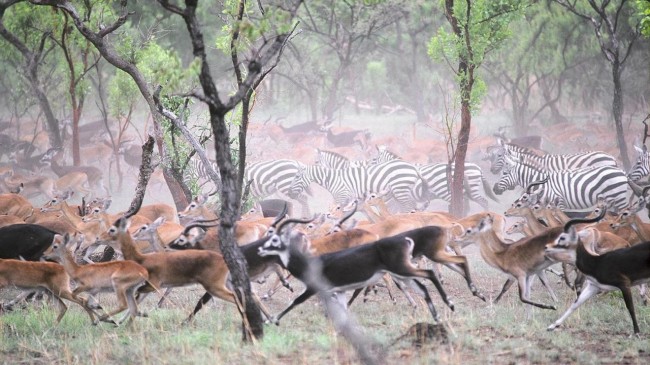 In the pictures that follow feel the power of instinctual herd-mind, the determination, the need. 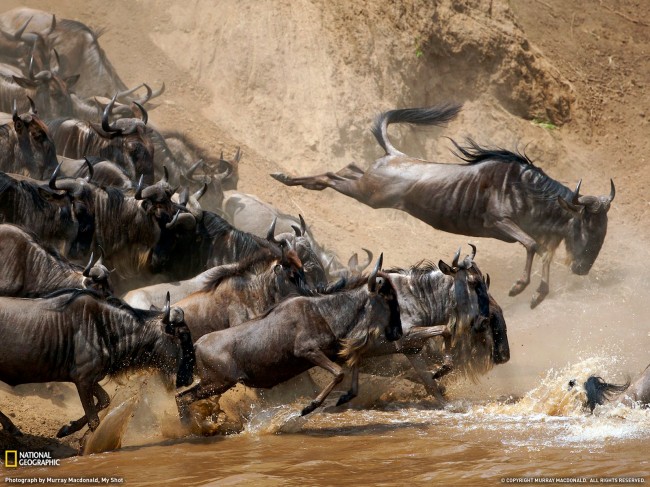 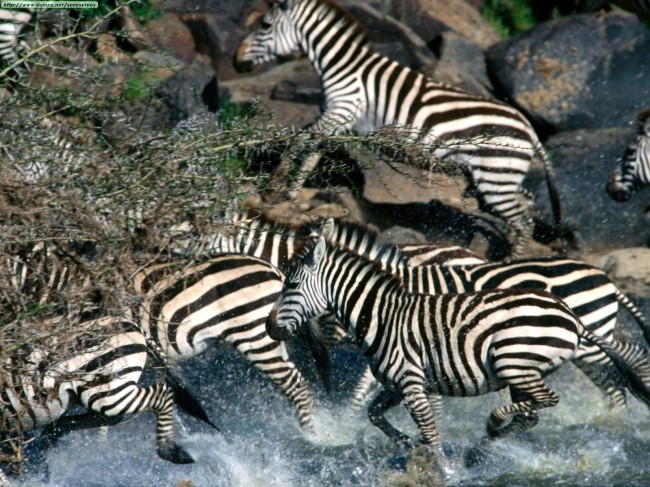 Burchell’s zebra crossing a river during migration       via dulops.net 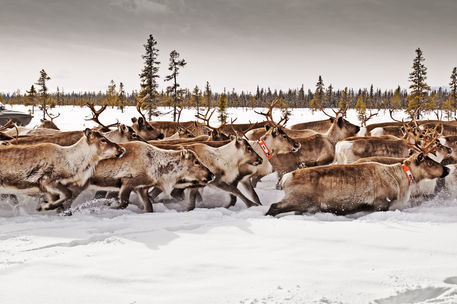 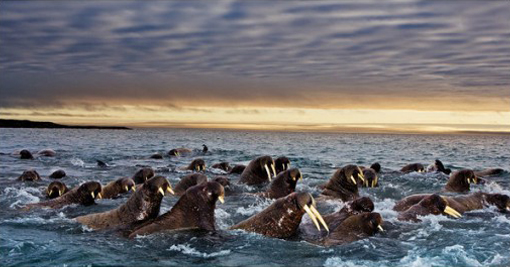 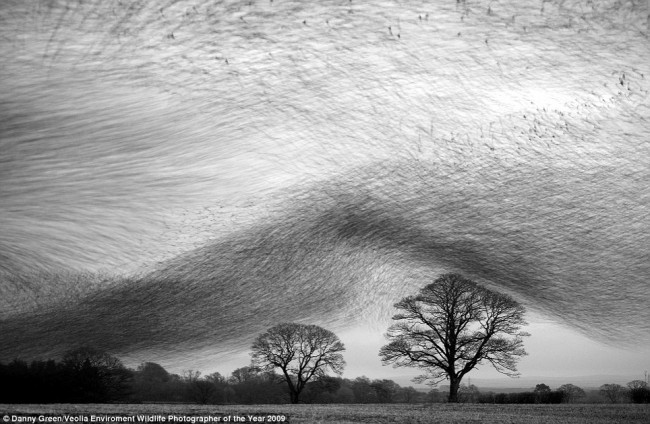 Green was  the Veolia Environment Wildlife Photographer of the Year 2009 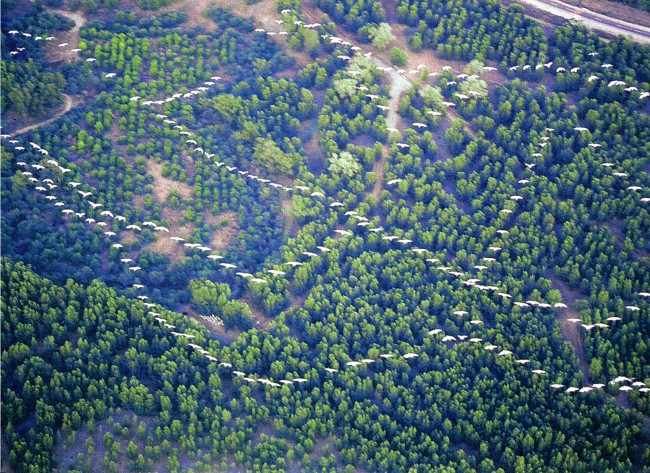 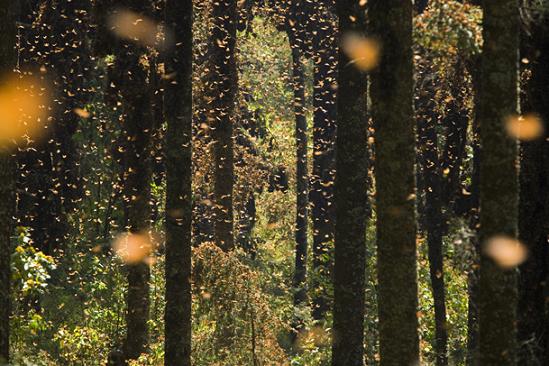 I like to compare this image of butterflies with the one of white-eared kob near the top — masses of creatures determinedly threading through a sunlit woods.

I got started thinking about all this after watching a BBC video, Millions of flamingoes descend on the rich waters of Lake Bogoria.   [Watch it here.]   You will see a swelling river of pink that can’t get broader, then does.  Millions. 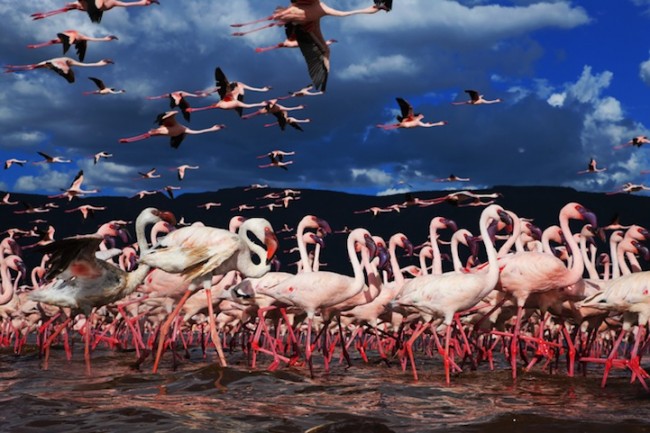 Some claim that 8 million bats converge on Zambia’s Kasanka Park, hungry for fruit.  As many as 2 billion Monarch butterflies fly off to seasonal grounds.

The Serengeti’s famous migration is dominated by 1.5 million wildebeest.

To put these numbers in perspective, the highest capacity football stadium in the US, Michigan Stadium, holds 107, 501 people.   (Love that 1?) 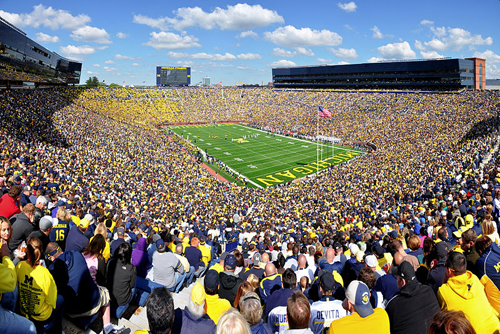 Look at all these individuals and then multiply them by 14 — fourteen stadiums full of humans would equal the count of wildebeest migrating together on a given day.  Think how the ground must shake.  Wildebeest can weigh 265 to 600 pounds.  A tidal force of massive animals, intent on one goal.

And all the predators who follow at the edges of the mass.

While writing this I’ve been thinking of a favorite Bob Dylan line,

Meantime life outside goes on all around you.

All the magnificent force and muscle of our green planet does indeed go on, all around us.

look further:
Bob Dylan’s lyric
This post is a living paean to the glories of nature photography.  Here are a few image sources I found while researching this topic.

This beautiful creature is the much-maligned bat, an eater of fruits.    via tribes.co.uk 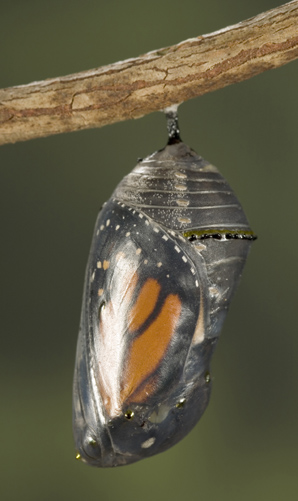 Monarch butterfly nearly ready to emerge from its cocoon    via veryveryfun

Thanks Artlandia. Your patterns aptly concentrate the roil of all that thundering life. I especially love in Pattern 5 that the zebra’s head stands out above the mass in every repeat, anchoring it, focusing it.