* Links to New York food and attractions are at the bottom of this post.  Leap ahead to access them. 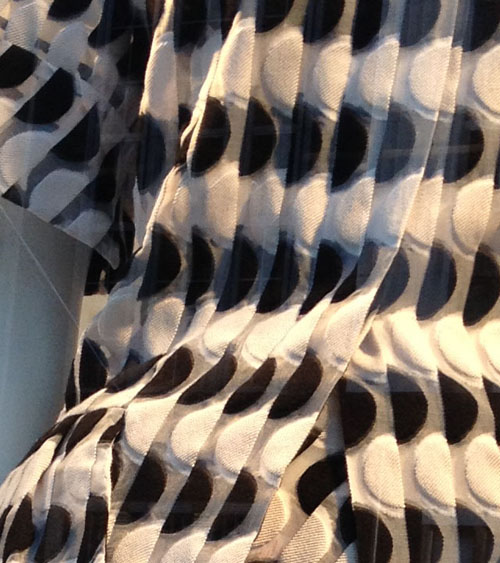 New York.  Just what you want on your way to Penn Station — a taxi driver who’s timid and law-abiding.  But when your feet have walked literally hundreds of blocks in the past ten days you’ve gained a certain perspective.  Plus I’m now ensconced in the blessed ambiance of Amtrak’s Quiet Car — perfect for reflecting on my recent altered state as a vacationeer.

Perhaps you remember this dress from my March 22 post.  It’s the actual dress worn in a painting in the Met’s show Impressionism, Fashion, and Modernity.  I remarked on the dressmaker’s skill in handling the stripes of the fabric both in the skirt and the cuffs.  Hence the detail above of a polka-dotted dress now in a Bergdorf Goodman window.  And the whole dress below. 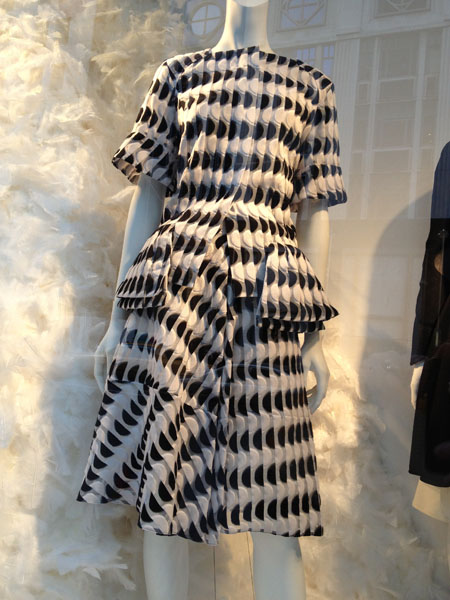 This dress is a stunning example of design and facture.  See how the dots and seams are handled, the slants and verticals, the added flounces, all in perfectly tamed sheer fabric, polka dots as regimented as Rockettes in a chorus line.  Wish I knew the designer’s name, but I couldn’t find the dress on the store’s website.  Please send me a note if you know who this designer is.  Work this exquisite shouldn’t go unattributed.  [The dress is from the Italian fashion house Marni.]

My view is every visit to New York deserves a stroll by Bergdorf Goodman’s windows.  The wild invention of its window-dressers is justly renowned.  They were finishing a suite of windows while I was there.  An unassuming man in shirtsleeves was standing on the sidewalk telling his staff just how to position a mannequin inside the glass.  “Higher.  Facing me.  No.  Ah,”  and he disappeared.

One adventure began at New York Central Art Supply at 62 1st Street.   Never knew about it — a richly patinaed store with drawers and drawers to prowl for a perfect blue in your favorite medium.  Upstairs is the paper department with a knowledgeable and friendly staff and a luxurious selection of Japanese rice papers, marbled papers, embossed, gilded, printed papers, papers galore. Missed the NY Central Art Supply’s Pop-Up Shop at 130 East 12th St, #1.  Hear it’s a great place but failed to listen carefully enough to directions.

A few blocks away is Casey’s Rubber Stamps, a wee dark shop with an engaging Irish owner and a whole lotta rubber stamps.  I bought a curvy octopus and had fun to boot.  It’s the kind of un-gentrified establishment that’s a joy to find in our Gap-ified land.

When it was time for a tea break I lucked onto Frank, A Place to Eat.  Their website quotes this review:

Good luck getting into this itty-bitty teeny-weeny, no reserving East Village Italian, but “dreamy” pastas and “heavenly red sauce” justify the “cramped” digs and “obscene wait”: wags advice “go with petite friends” and “bring your own table”             Frank Restaurant and Vera Bar

I’d already made dinner plans or would have stayed for a whole meal.

Here are a few random New York highlights before the section of links begins.  The top floor of ABC Carpet on Broadway is better than some galleries.  They feature a line of such glowingly hued carpets that they may be sprinkled with fairy dust.  They’re high-priced, but eyeballing them is free.

If you’re on the Upper East Side Carl Schurz Park offers a pleasant stroll beside the East River.  Sit on a bench and watch tugboats escorting ships through the channel.  Or lean on a railing above the big dog run and watch a bunch of exuberant canines having a blast.  Remember they live in apartments.  There’s a benched section not officially dog territory that I call the Yippy Corner.  Here the really small pooches romp together — small dogs, big glee.

To taste a city find out what’s passing through town while you’re there.  The living breath of a city.  Couple of the things I caught were a performance in Grand Central Terminal and a temporary sculptural installation in Central Park.  The performance featured Alvin Ailey student dancers in soundsuit costumes by Nick Cave.  Cave’s two-person costumes made shaggy horses with elegant heads.  They ambled round the space, then the dancers split apart and the raffia-draped hind persons shook and rolled and made a fine susurration as the horse heads made their own moves — then all rejoined and the horses moved back to their initial positions.  Part of the fun is that the costumes were draped over sawhorses before the performance.  The dancers then march out and don the several layers of costuming.  They merge into horses who horsily rove, then the dancers step out of costume and march out in rows. 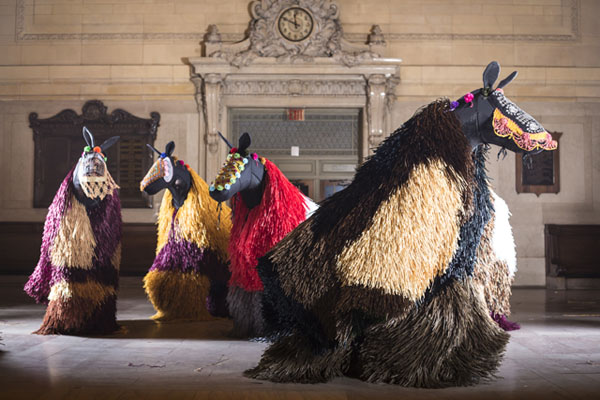 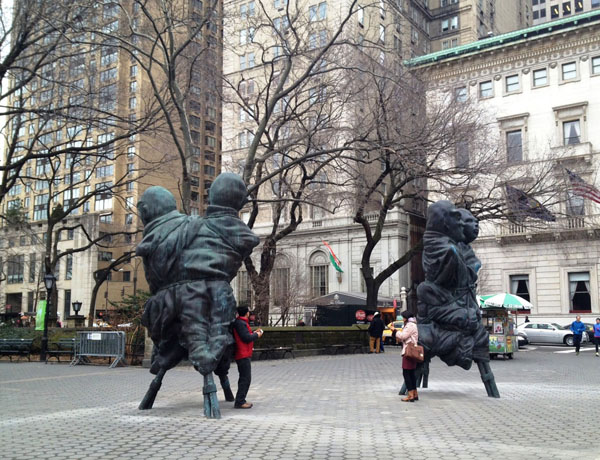 The pair of bronze sculptures is deliciously placed so that it addresses the gilded rump of General William Sherman’s horse across the street.  I understand that Sherman is a Union Army hero from America’s Civil War, but his tactics were savage.  This is a Southern woman’s account from the time:

Atlanta fell to Sherman’s Army in early September 1864. He devoted the next few weeks to chasing Confederate troops through northern Georgia in a vain attempt to lure them into a decisive fight. The Confederate’s evasive tactics doomed Sherman’s plan to achieve victory on the battlefield so he developed an alternative strategy: destroy the South by laying waste to its economic and transportation infrastructure.

Sherman’s “scorched earth” campaign began on November 15th when he cut the last telegraph wire that linked him to his superiors in the North. He left Atlanta in flames and pointed his army south. No word would be heard from him for the next five weeks. Unbeknownst to his enemy, Sherman’s objective was the port of Savannah. His army of 65,000 cut a broad swath as it lumbered towards its destination. Plantations were burned, crops destroyed and stores of food pillaged. In the wake of his progress to the sea he left numerous “Sherman sentinels” (the chimneys of burnt out houses) and “Sherman neckties” (railroad rails that had been heated and wrapped around trees.).

via Eye Witness to History.

The golden statue of the general and horse puzzles me.  It seems like enshrining replicas of Little Boy and Fat Man, the atom bombs that were dropped on Hiroshima and Nagasaki.  Enshrining in glittery gold.  Off key.

Places to Eat, Things to Do, Oddball Shopping in New York — my past ten days 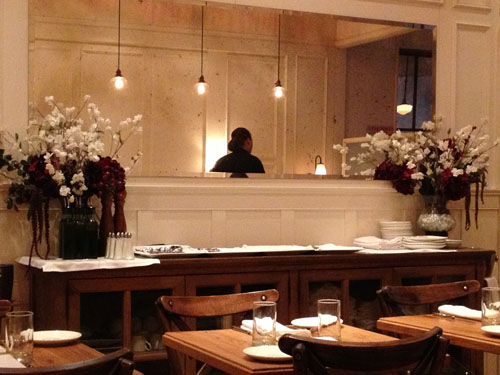 EAT    Food is among the city’s famous pleasures.  Expect to see haricorts verts and baby artichokes on a dinner menu.

•  East End Kitchen      539 East 81st Street, btwn York & East End Avenues
Food so good I went there twice.  Pleasant room and staff.
*  Uva  1486 Second Ave, btwn 77th & 78th Sts
Buzzing popular spot.  Salad with baby artichokes was delicious.
*  Frank Restaurant & Vera Bar   88 Second Ave, btwn 5th & 6th Sts.
More about this above.  Cash only, reservations for large groups only.
•  L’Ecole     462 Broadway, corner of Grand St
“Delicious food prepared by prestigious student chefs at The International Culinary Center.”  Wish  they hadn’t changed their champagne cocktail.
*  B Cafe West      (There’s also an East version on East 75th St.)    566 Amsterdam Ave, btwn W 87th & W 88th Sts.
Zagat rated “Belgian Pub Grub” — the mussels and fries were a big hit at our table.
*  Cafe Sabarsky at the Neue Galerie   1048 Fifth Ave, at 86th St.
The Neue Galerie museum focuses on German and Austrian art.  Klimt, Beckman…  Their cafe is a timeless haven away from urban nerves.  Had a cold smoked trout crepe that was delicious.  I love this place.  Download the menu from their website.  There is also a Cafe Fledermaus that I haven’t seen.

FOOD EMPORIUMS       Two stores crammed with foods and customers.  Zabar’s is famous and luscious but I actually felt Agata & Valentino had the more succulent array.  Go to both for quality ingredients, specialty goods, prepared foods.

*  The Museum of Modern Art  (MoMA)
*  The Metropolitan Museum of Art
Impressionism, Fashion, and Modernity
Plain or Fancy?: Restraint and Exuberance in the Decorative Arts
After Photoshop: Manipulated Photography in the Digital Age
Birds in the Art of Japan
At War with the Obvious
•  Chelsea galleries — A couple of guides.  Don’t expect them to be complete.
On Art-Collecting.com
Chelsea Galleries map
•  The Frick Collection     The Frick has some superb Rembrandts and Vermeers and other nice surprises.
The Impressionist Line from Degas to Toulouse-Lautrec        Didn’t think the curator(s) explained enough about the supposed focus: line in Impressionism.
*  Morgan Library
The Morgan Library & Museum, New York, founded by Pierpont Morgan
Drawing Surrealism
Degas, Mis La La, and the Cirque Fernando
Marcel Proust and Swann’s Way: 100th Anniversary

•  MoMA Store — just across the street from the museum.
A delightful collection of design you can own.
*  The Bowery   Great stores to poke through on Bowery Street.  Kitchen supplies (as in deli cases, monster stoves).  Also numerous lamp and chandelier shops.  Who’d think so many designs were on the market?
Lighting by Gregory, 158 Bowery     very contemporary and fun to browse.
The Light House, 162-164 Bowery  This is next door to the above, more traditional.
•   ABC Carpet & Home     888 & 881 Broadway, at East 19th St    (mentioned above) 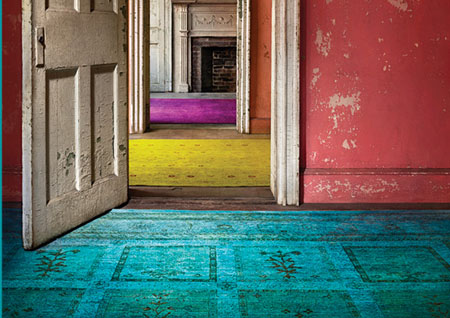 OTHER    Other, other, other — this is the feast called New York. 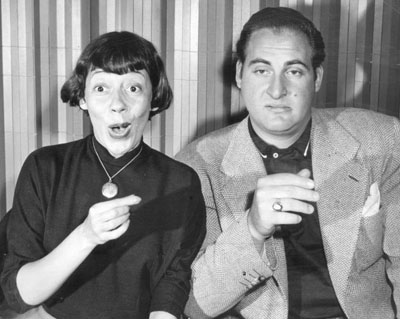 Imogene Coca and Sid Caesar on Your Show of Shows

Choose from 100,000 TV shows to watch, 1.5 hours a sitting.  Parties of two (possibly more) can share a monitor, each with headphones.  Priceless memory: Looking up from the oldtime puppet show that a friend wanted me to see, and across the way were Sid Caesar and Imogene Coca.  Never appreciated Coca’s physical comedy so much.  One of the great comediennes.  Comedy must be big — you hear laughter all around the room.
*  Carl Schurz Park     East End Ave To East River, E 84 St To E 90 St     (mentioned above)
*  Grand Central Terminal —  89 East 42nd St & Park Ave    (mentioned above)
Grand Central Terminal :: Guess Who is Turning 100?
Nick Cave’s Herd of Horses Hits Grand Central | GalleristNY
Next Articles >>
Subscribe
0 Comments
Inline Feedbacks
View all comments