To my readers.  I’ve wrestled with this piece overlong so I’m splitting it in pieces.  Appropriately, yes?

Here is the beginning. 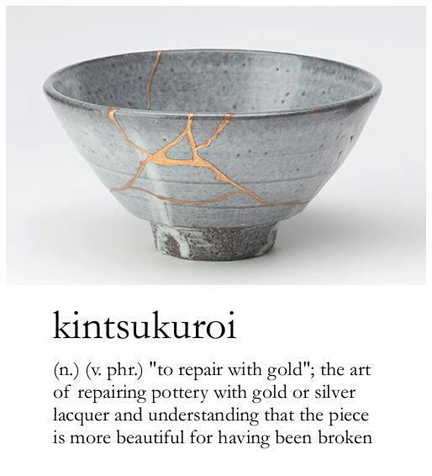 This deep and whole-some thought of kintsukuroi set off a chime in me.  It’s been showing up in blogs — not a full-throttle meme but a resonant current in the flux and flow.  I started following the idea. 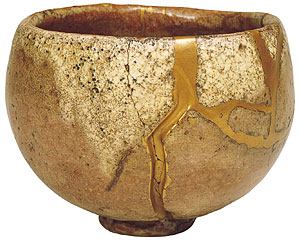 Cracks in this earthenware bowl were filled with lacquer, and then gold powder was sprinkled on the lacquer before it dried. This technique is called kin-zukuroi (repairing with gold). The artisan, Hon’ami Koetsu (1558-1637), intended the repaired part to represent water flowing from melting snow. (Akaraku ware tea bowl, named Seppo. Property of Hatakeyama Memorial Museum of Fine Art)

Melting snow?   You start to get stories in your head looking at this one – 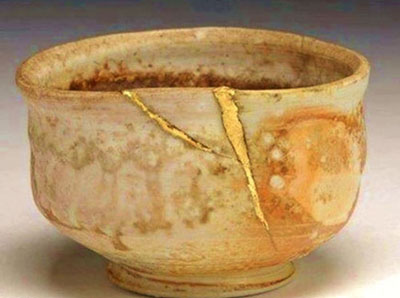 wabi-sabi bowl     via peanut on the table 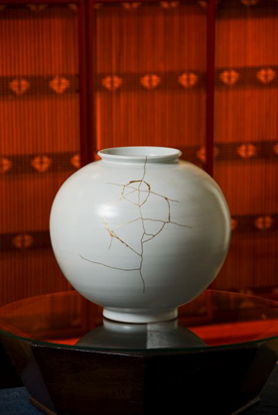 this delicate object is from a Japanese language site, Garage.B       gb.kintsukuroi.com 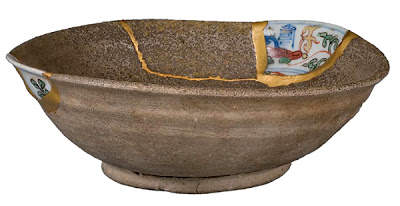 This tea bowl (image from here) was made in the 15th century and repaired (yobitsugi repairs) with 18th century porcelain.

Read about the careful process of mending, and see more beautiful ceramics, in this catalogue  from a 2008 exhibition at the Lacquer Museum in Muenster.                    all via margaret-cooter

Isn’t it wonderful that the breakage in the 18th century bowl snugged so well into the breakage of the older one?  A  fable could be made of it.

The term wabi sabi turns out to be wide arms into which kintsukuroi fits.

It is two separate words, with related but different meanings. “Wabi” is the kind of perfect beauty that is seemingly-paradoxically caused by just the right kind of imperfection, such as an asymmetry in a ceramic bowl which reflects the handmade craftsmanship, as opposed to another bowl which is perfect, but soul-less and machine-made.

“Sabi” is the kind of beauty that can come only with age, such as the patina on a very old bronze statue.

Wabi and Sabi are independent word stems in normal speech. They are brought together only to make a point about aesthetics.

via Wabi-Sabi: For Artists, Designers, Poets & Philosophers, by Leonard Koren ISBN 1880656124,  via c2.com/cgi/wiki?WabiSabi

The following three examples are from the delightful site Past Imperfect.  Kintsukuroi is not at issue, but just the repair of damaged goods. The quotes are by the blog’s author, the interior designer Andrew Baseman.

Antiques with inventive repairs (also known as “make-do” repairs) are unique examples of necessity and thrift, made during a time before Krazy Glue was invented. Unlike today where we discard anything chipped or cracked, broken household items were repaired at home or taken to a metalsmith to be brought back to life, often with whimsical results.

After this mug was smashed, the body was held together with the aid of 40 metal staples of varying size and the handle was repaired with 6 metal bands.

Baseman’s thorough explanation of how china can be stapled is here. 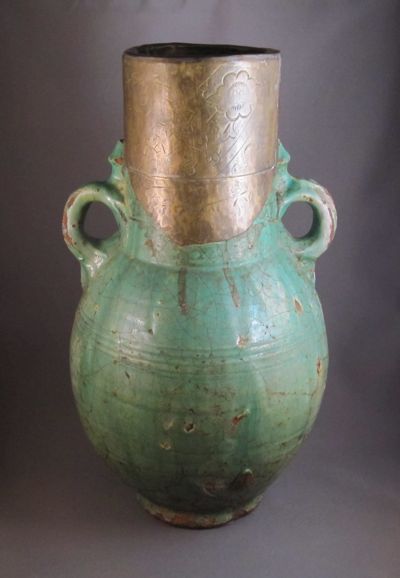 Mystery ceramic vessel with incised brass collar        via Past Imperfect 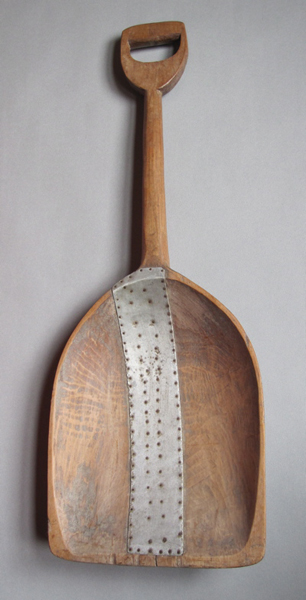 Hand-carved wooden shovel with metal repair        via Past Imperfect

It was not unusual for large utilitarian pieces carved from a single piece of wood to crack. The farmer who repaired this piece was quite thorough, using a large piece of metal and dozens of small nails to repair the split blade.

I love the lilting design of this grain shovel repair and its modern-today feel.  The smart metal curve, the symmetric march of nails.

And today the tradition lives on. 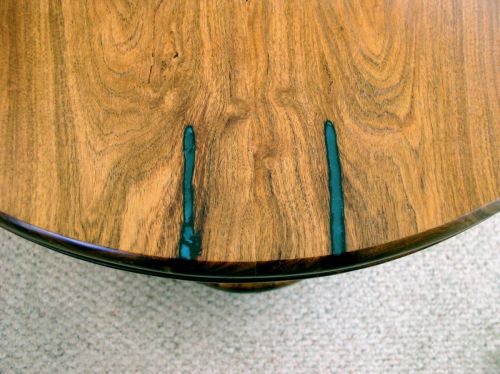 The woodworker filled cracks and insect holes in the mesquite with casting resin and ground turquoise. 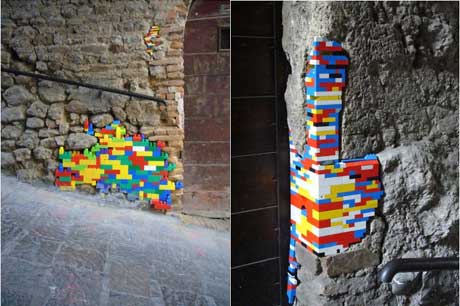 The Japanese term kintsukuroi is aesthetic and philosophical.  I can’t think of a term in English for the goodness that something aesthetic may bring.

Wabi-Sabi Your Life | the accidental sufi

[…] Photo Credits :https://sloannota.com/crash-art-kintsuori-and-modern-dreams/)The art of filling pottery with silver  or gold lacquer to repair the crack and understanding […]

Sufi, thanks for the credit. May all your cracks be filled with gold.