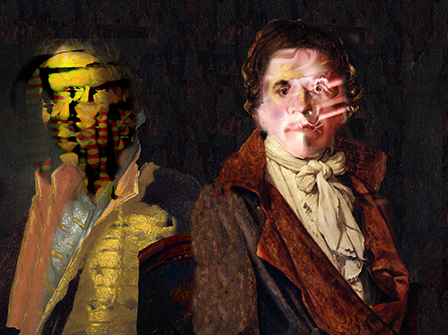 A child is sure monsters are under her bed. Or in the closet. She’s young, the frights of the adult world are disconcerting. Makes perfect sense, monsters. How many ears they have is up to you. How many tentacles. Green?

To counteract, to serve as amulet may be a cat, a blankie, a fuzzy toy. Something to dispel the spells hiding in her room. God works for some people, a special saint. And you must understand the fear is real. The threat, the entity. Facing these dreads may be part of your childhood.

Will it work when you’re adult?

Grown men parading with tiki-torches through the public night. You’d think they’d see the comedy. But no, they know they are conveying menace, self-consciously mimicking the KKK’s burning crosses, solely to make other peoples fear. They exude buckets of man-smell in the hot night, which emboldens them. Righteous men demanding their rights from their oppressors — women, Jews, blacks, people of all colors not milk white.

How different is the child in Bambi-themed pajamas from these grownups who’ve convinced themselves they are oppressed by women, races, Democrats? The child is still innocent but the grownups know right from wrong, sense from nonsense. These men, the torch lights, the fervor building in their throats. They know but also they do not.

When will fMRIs [functional MRIs for exact neural pathways] show us what this behavior looks like in the brain? The eyes take in one-of-them and there’s a direct (I think) shunt to emotions such as hate. Trained into them because they’re never born this way. It’s a shunt to powerful emotions that you are agreeing to be taken over by.

Think of it as a car-jacking. You look at flowers, chairs, breakfast, you’re you. But when your eyes light on a Someone you have no more control than a schizophrenic hearing voices. You can’t stop the perception being highjacked by hideous emotions that you don’t normally feel. You become horrible.