This tale starts in the 20th century with two world wars and the atomic bomb.  Europe, Asia, North Africa, rubble. Dead heroes, wraiths with numbers on their wrists.  Massive displacements.  Two legged and four legged creatures.  Birds whose corn fields and forests had exploded in flames.

The sticky-bun goo of life’s warm verities had phase-changed into nasty-tasting solvents.  Then Picasso, Stravinsky, all the brutal aesthetic dismemberments that brought high culture into sync with the times.

Aesthetics had betrayed them so they smashed beauty.  And reformulated what beauty could be, without golden triangles.

At some point the idea of breakage got split off from the need to do something grand with the pieces.  This perfectly-editted animated gif illustrates it beautifully.  And I freely admit that my emotion watching this is Yeah, slam it again!

I’ll be talking about three kinds of breakage today.  This is the Wanton Tantrum version.  It’s an aesthetic that pervades a big swath of culture and I full-bodied-ly relate to it.  It says something and you can hear it.

Hang a fender on a gallery wall and I once cried Yes, destroy all damn givens!  That was back when contemporary art was the great liberating force in my life.

Now I compare the gif and the fender and the gif works.  The fender’s an affectation.  An adolescent mooning the grownups and feeling damn proud.  Now my view of contemporary art is more fierce and protective.  I get it, it’s my turf, and I’d like to chase the poseurs out with a rod.

Which brings me to a second kind of breakage.  Unlike the smashed guitar, this involves pieces that are put back together.  Not in a kintsukuroi fashion, and not as repairs, but as Art.  Seven different broken plates glued together in a fatuous array.  You can find it on the Web.  Seeking your monetary affirmation of its worth.

OK, I didn’t count the plates.  But this is an example of Look, I Put Some Pieces Together — It Must Be Art.  It says nothing.  And it’s an invasive aesthetic.  We live in an age of pieces — aisles of food in cans and boxes.  DIY IKEA.  It makes sense that pieces are a modern trope.  But no one pretends a supermarket is their work of art.

What you do with pieces is a level up.  What Picasso and Stravinsky — and hundreds of other artists — did in their day was focus on the art of bringing pieces together masterfully.

Which brings us to breakage version three.  Here we require that the pieces get assembled with creative fire, with a will to create something new.  Internal logic, harmony of line or mass or color, an artwork that’s legitimately more than a sum of its parts.

So here are three ways that the arts handle breakage.  The Wanton Tantrum is an effective performance strategy.  It Must Be Art is a Barnum sideshow.  More Than a Sum of Its Parts is a practice of true artists — diverse wild-things finding a groove in the studio, meticulous craftspeople seeing a bigger whole and making it real.

The Danish ceramicist Michael Geertsen  hand-throws traditional shapes like cups and bowls on a potter’s wheel and then reassembles them to create strange and elegant forms.  His work isn’t about breaking things in pieces it’s about treating the pieces as raw material.  And then creating an unexpected new thing.  Art. 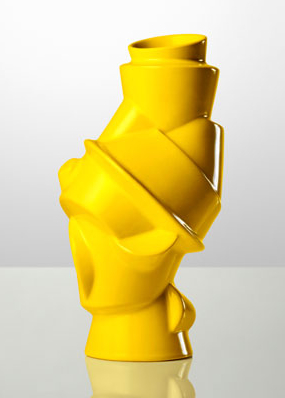 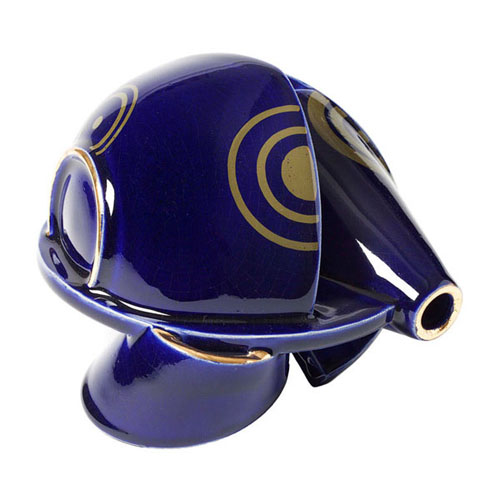 Gaetano Pesce — Italian designer with cosmic exuberance — breaks the convention of Urn with his vase.  Cut-away sides, footed with puddle feet.  A flexible material.  I lust after this vase — though in a 24-inch model that may not exist.  It appears it would hold flowers too, should any flora be diva enough to withstand the competition. 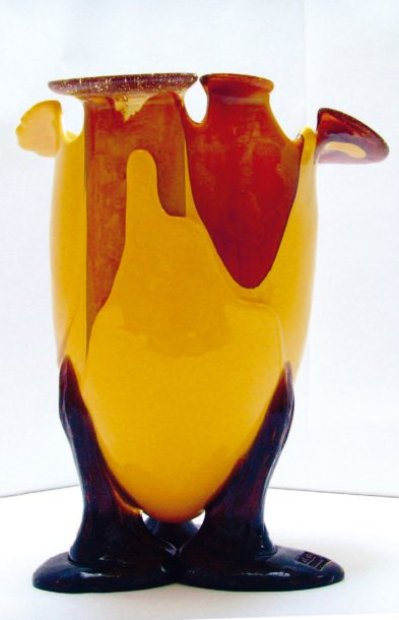 The gonzo painter Julian Schnabel is quoted as saying he’s aiming at an emotional state, a state that people can literally walk into and be engulfed.   His famous Plate Paintings totally woke me up early on.  He covers his ground with broken dinnerware and then paints his image.  The breakage here is random and meaningless (compare Geertsen’s cups and bowls) but the effect is visceral. 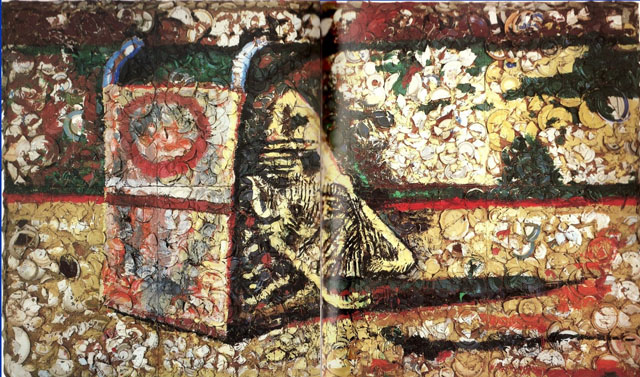 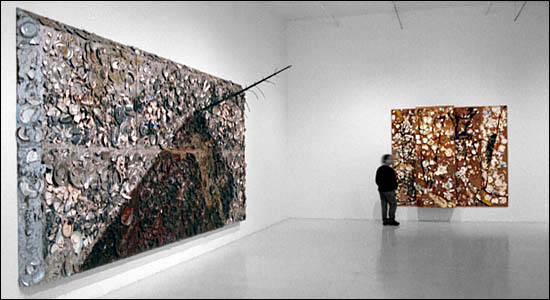