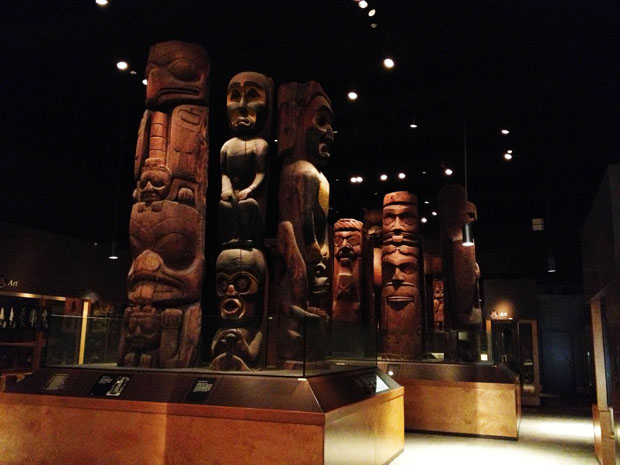 Imagine walking through a museum exhibition of the Americas’ preEuropean cultures, passing aisles of glass cases with Plains Indians garb and artifacts in well-lit rows, and turning a corner into this moody chamber.  The towering presence of carved cedar house poles from the arctic crowd above you. Power.  They retain a seriousness that fluorescents would dispel.  Shoulder-to-shoulder, closer than they’d stand in real life, they demand to be reckoned with.  They’re not Art, they’re Other.

And yet notably they’re art.  If you’ve ever tried carving a footlong chunk of wood you’ll appreciate the skill that liberated images from tree trunks many times human height.  Early arctic housing used big timbers to hold up roofs.  The formidable carvings above functioned as architectural necessity as well as spiritual presence.

I did an earlier blog post about wood as an artistic medium (here).  In it the estimable artist Ursula von Rydingsvard, who works in New York with Northwest cedar, praises cedar for its softness, “all the gentle marks get registered,” and for its warm rosy tone.  In a synchronicity moment, the MOOC I’m taking about global architecture makes much of the value of red ochre in first societies around the globe.  The professor thinks that redness connected living people to their ancestors and suggests that it possibly explains the use of reddish cedar in these house poles.  (This I’d want more evidence for.) 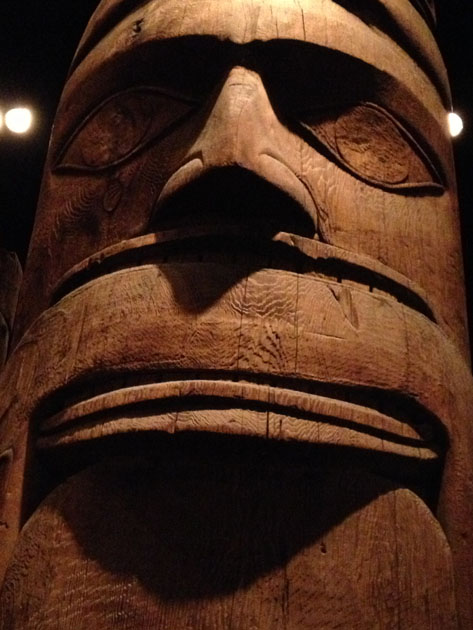 There’s no doubting the power of belief that hewed this unflinching face.

The Arctic Peoples exhibit is rich, crammed — shamanistic masks, scrimshawed bones, a life-size model house with an alert dog perched on its snowy roof.  I was moved, enlightened, smitten.  Funny how you can know about a culture for years and store it in a cubbyhole in your brain — and then you’re given a door into its heart.  Which opens yours, and you’re forever richer.

The Field Museum has some marvelous exhibits.  Whenever I go I learn things.