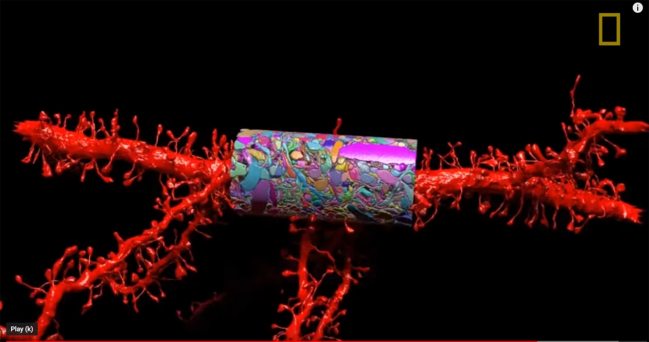 A lens can focus light to form an image, unlike a prism, which refracts light without focusing. Devices that similarly focus or disperse waves and radiation other than visible light are also called lenses, such as microwave lenses, electron lenses, acoustic lenses, or explosive lenses.   Wikipedia, lens

Humans who seek to reach others nonverbally by color, gesture, shape, were in past centuries limited to what they could draw, paint or sculpt with. That began changing with human experiments in focusing in (microscopes) and out (the scale of telescopes). We began to equal and exceed the abilities of flies and bees. We saw things that no human before had any notion existed. In pond water, in blood.

My last post Art and Experimental Media explored how science can change art. Let’s go further. The notion of focusing both in and out has been expanding. Scientists now turn art techniques to science to reveal new complexities. The Brainbow above is a technique for imaging neurons, for keeping one separate from another so you can trace from here to there.

And isn’t the image above spectacularly gorgeous? What I want to see is this brainbow technique pursued by serious artists. This type of image worked in with other kinds of image. For it to step from scientists to artists with agendas utterly other.

I’ve recently become aware of the MIT graduate Michael Fogleman who enjoys making small apps for the visually ambitious. He’s my hero right now, exactly the free-wheeling brain that can deliver me a slew of techniques for that I can accumulate and then begin bringing together.

If this seems far afield from imaging technology (electron microscope, Hubble telescope) remember that the brain is a superb focusing device. And Fogleman’s apps allow you to make images that you hadn’t imagined.

Welcome to an abundant world for artists to harvest from.

You should make some art with these images — perhaps you are!