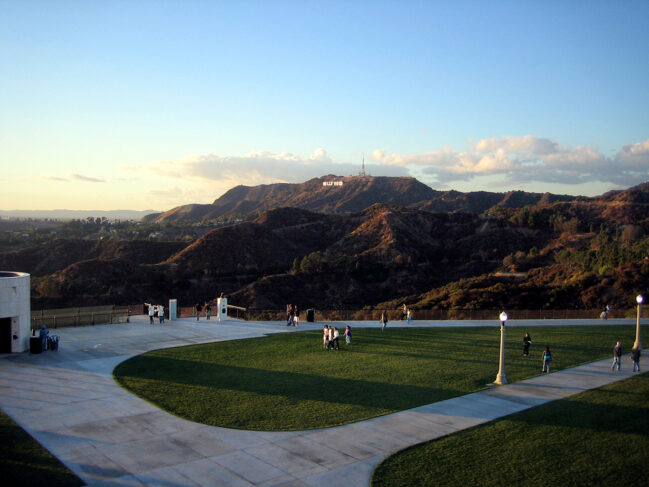 View of HOLLYWOOD sign from Griffith Park after a rain (Los Angeles). By Serouj – Own work, Public Domain, https://commons.wikimedia.org/w/index.php?curid=1472176 .

In yesterday’s post I had one reaction to a Washington Post readers’ squabble over the merits of Mark Ruwedel‘s Seventy-Two and One Half Miles Across Los Angeles. In that piece I proposed an example of a better photographer, Clem Onojeghuo. I said that Onojeghuo’s work has a pulse. Ruwedel’s study of Los Angeles does not. Or at least what we were shown.

I learned to drive in LA County. Ruwedel’s photos give me a wee chill up the spine. Nothing moves — mocking bird, thirsty dog. Darting car. The exception is one photo in which two marginalized people meet in the dust alongside a big street with cars racing by.

Another Ruwedel photo shows a decaying corner building with a poster slapped on it, History as whitewashed as abandoned walls. Broken plaster, window graffitied and barred . You think you see Ruwedel’s point. LA,  sweaty trash-strewn miles of one-story homes and downtowns, once optimistic.

This kind of photojournalism was done with more insight in the 1930’s. Today it’s wrung dry. Ruwedel adds nothing with life left in it.

I ask journalism to show me something new, or something common in a new light.  And in our currently divided nation it’s vital that we understand our shared humanity. Showing me abandoned corners in Inglewood tells me nothing about roller skaters at Venice Beach. But domestic violence festers in both places. The people behind gates in Bel Air bleed as quickly as those in South Central LA. Rich and poor order pizza. Black and white. There are daffy folks high and low. They’re human. I can guarantee you that sycophants, narcissists  and tax cheats live in every zip code.

I know many people live in foul circumstances. You don’t have to tell me again. Sure, show me heroes with low incomes, but let’s get real. Show me the famous rich folks who normally get credit but show me too heroin addicts beside their big pools. Don’t point out the bleak and pretend the lush isn’t there. That wealth doesn’t miss their old dog, or has a soft spot for popcorn, or roots for the Dodgers. A homerun, and the roar that goes up is from folks from both sides of the tracks. You can’t pick out just one side of it. You know in any neighborhood there are racists and misogynists aplenty. But they have neighbors who are high-minded, kind, loose enough for silliness. There’s someone rich grieving a beloved grandfather, there’s someone peeking at the girl next door. Someone’s drunk and someone else is drinking carrot juice.

Who really believes that LA can be summed up as a blight in need of Clorox?? LA includes millions of people living comfortable, even fashionable lives. I’m tired of narratives in which it’s either down-run or Camelot.

I’m trying to learn this. To see people instead of categories. I read one man who said his wife was in the Capitol police, his mom was in the mob. I’m trying to see his mom. I require that she not be packing a gun. I’m new at this, can’t stretch too far. But otherwise a Trump follower. All the one-celled life living in my gut recoils — but she bleeds, laughs, will someday die. Maybe she’s saved her toys from childhood, subscribes to garden magazines, eats spaghetti on too many nights.  Other than the Trump bit, she’s just like every other human.

When I finally can believe she’s fully human I’ll be someone new.