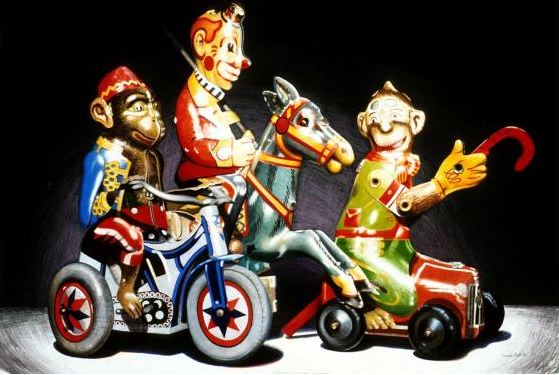 Realism comes in as many flavors as cheeses do.  French, Greek, Wisconsin :: portrait-of-the-queen (all the beads, none of the warts), ruthless (featuring warts), lyric (Georgia O’Keeffe out-blooming flora), and modern Photorealism (as the Charles Bell example above).   We’re interested here in a realism that’s lively, living, breathing — even Bell’s tin toys fit in.  The toys’ pixilated expressions seem eager for the race. 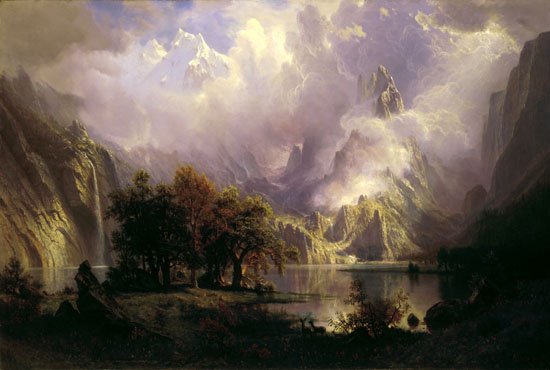 Here are two 18th century sculptors for a dark and light look at this enlivened realism.   Johann Joachim Kaendler and Franz Xaver Messerschmidt coincided in space and time but in little else.  The first designed figures for the Meissen porcelain factory, the second did portrait busts in metal and stone. 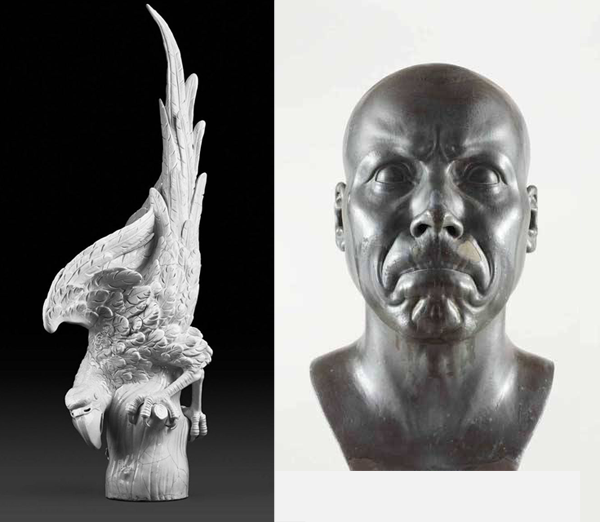 One of Kaendler’s porcelain parrots and Messerschmidt’s The Difficult Secret.          Kaendler via the Museum of Fine Arts Boston and Messerschmidt via publicoccurnc  [couldn’t find another pic, don’t agree with the writing].

The parrot doesn’t pose — it travels with a goal in mind.  And you feel the pressure of emotion in the man.

The Boston MFA’s macaw has purpose, climbing down is tricky, its wings are positioned in an act of balance.

In May 1732 Kändler created one of the most dynamic and expressive animals of all-a life-sized Brazilian macaw climbing down a tree trunk. The earlier birds had derived from prints published in zoological treatises, resulting in static poses and occasionally stylized features. By spring 1732, however, Kändler based his models on live animals in the royal zoos in and around Dresden, achieving an astonishing degree of naturalism. Measuring four feet in height, this model is also one of the largest produced at Meissen.          MFA Boston

Compare a parrot modelled earlier by Kaendler — a lifelike pose but this parrot is an illustration of the species not an individual engaged in living.  And it’s that sense of aliveness in the moment that’s our spotlight today. 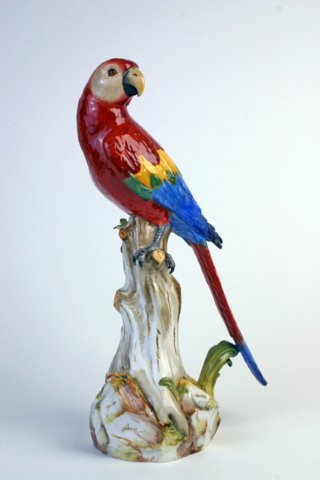 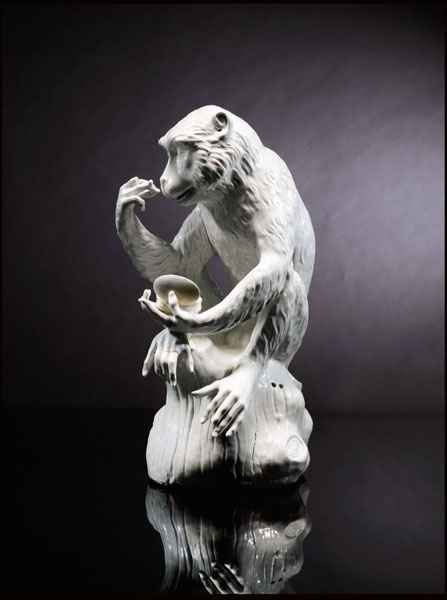 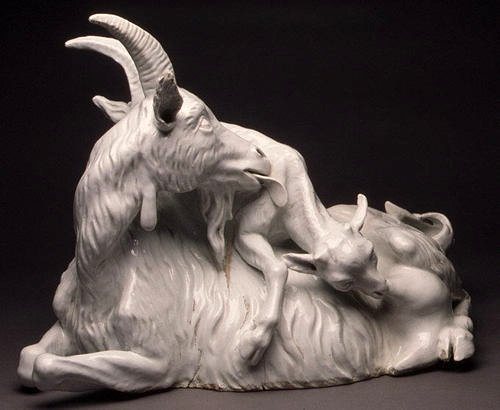 A monkey with a snuff box, a nanny goat that tenderly licks her kid who strains for milk at her teat. These aren’t formulaic poses.  One writer suggests the she-goat is gazing at her nearby ram. 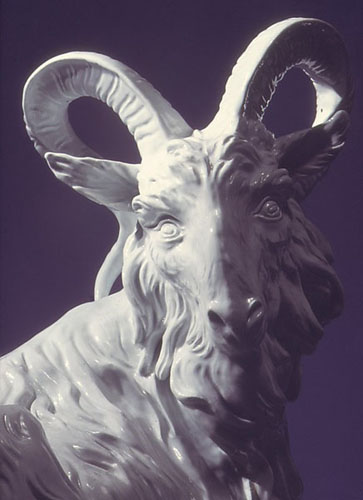 Franz Xaver Messerschmidt may have had some sort of mental breakdown or degeneracy partway in his career.  When he was well, he was respected for his Baroque and later Neo-Classical portrait sculpture.  When his health declined he moved back to the Swabian village where he was born and here he embarked on the unsettling busts he remains famous for. 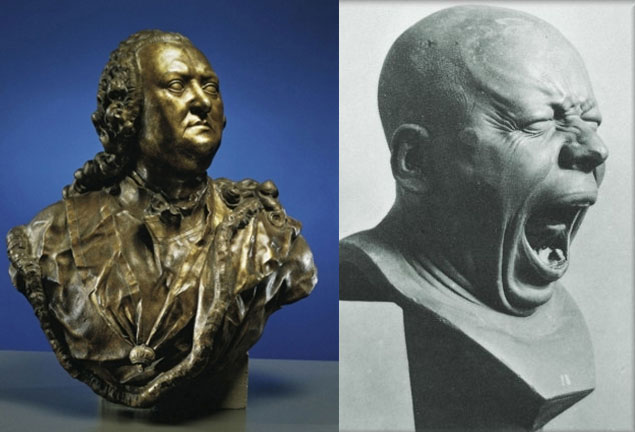 You can feel the shift from document and flattery to urgent expressiveness.  From staid to wild and crazy.  From a pose to alive and tingling.  The engaged realism we’ve sought today.  Two more of his intense emotional studies. 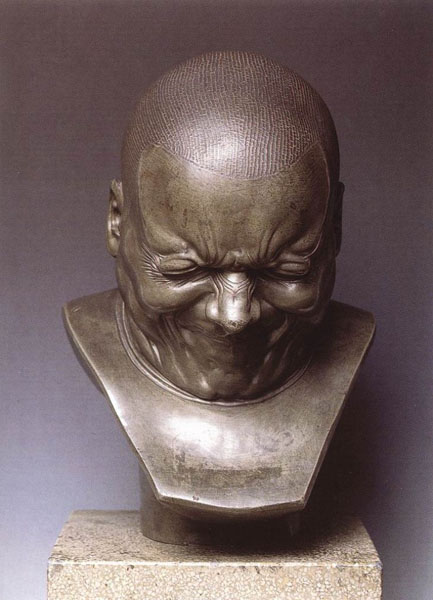 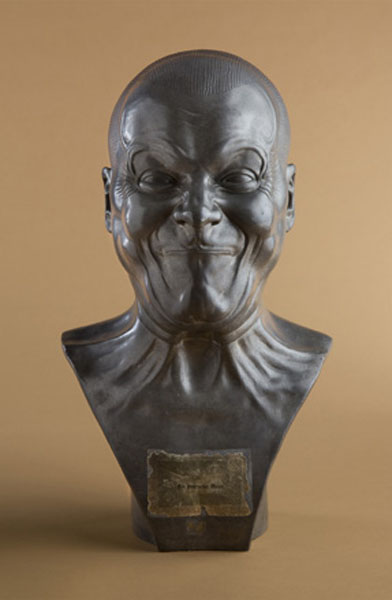 Most of Messerschmidt’s “character heads” were modeled on himself.  It makes you wonder how often he grimaced in the mirror when working on a head.  Ouch.  He commands anatomical resources in the set of shoulders, in sinews, in the jut or tuck of chin.

In-the-moment realism is just one of realism’s shades and flavors.  It has a certain vitality and juice.

As sometimes happens with this blog the topic grew like Audrey II and needs to be repotted.   Some fascinating bits about Messerschmidt in the next post.

The banner note made me wonder where your camera search has led you.