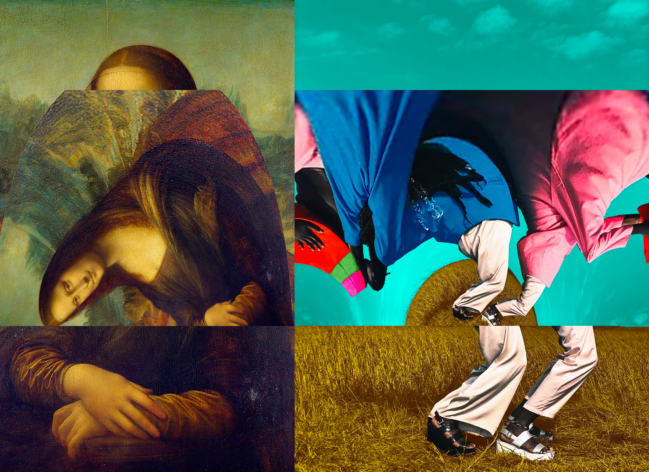 Last night I was woodshedded by a friend, in the sense that I was privately lambasted for my muddle-headed idea for testing the concept of fair use in copyright law.

If I’m in the right lane at an intersection and attempt a left turn any accident is my fault. No ambiguity. But if I justify my publication of an image by pointing to the text I write about it — well my friend says that sucks. A lawcourt might as well.

The lesson I take is that by displaying Gyasi’s image without his permission puts him, the unsuspecting artist, in a weird position he did nothing to provoke. I didn’t pull his name from a hat. I’ve collected well over 800 artists on Artsy and Gyasi’s work stuck insistently in my head. Mainly because of his startling success with color. I sought out his work in my Artsy catalog, going down one-by-one more than halfway before I hit on his entry.

Till then I could see the work in my head but not remember his distinctive name. Now I’ve published and commented on the work. If he doesn’t know yet, Google will most likely tell him. I owe him an apology for snagging him into a controversy. He did nothing to incite this stranger (me) than to do stunning artwork that the stranger saw. Unfair, reprehensible. Stupid.

Sir, I apologize to you.

Recently Ruth Bader Ginsberg lay in state while thousands of people filed past. Some needed to pause a moment to pray or commune, others hustled past mindful of those behind them. I have seen the Mona Lisa, but in that hasty second way. I looked, grokked, got out of the way.

Fact is I don’t quite get it about the Mona Lisa. I observe her standing in public regard but I’ve never connected with an aha! The Nike of Samothrace however takes my breath away. I stayed a long time with her from more than one vantage and as I left felt I was being dragged away from a piece of my heart. The sculpture I assume is centuries wise and understands how to cherish all the nuggets of self we leave in homage.

Prince Gyasi. The artist’s way with color is twofold. First is his ability to achieve an intensity of color saturation that could look hokey but doesn’t a bit. I believe his world contains this powerful color and he has found techniques that initiate and convince us. His second achievement composes photo shoots where color rules even though the models caught show raw individuality. His website quotes him  “color can serve as a therapy, it can treat depression and transform emotions.”Here is where I feel we meet,  I agree with every bone in my body. Colors are like fruits that you can bite into. Songs that give you wings.

Gyasi’s color is like a limp balloon he pumps with helium. He gives color extra meaning.