The first stone tools were made by animals 1.1 million years before those animals evolved to be early humans.  They could well have looked like this reconstruction of an Australopithecus.  Distinctly not human but a possible author of clever stone implements.

The Lake Turkana story is that archaeologists in Kenya took a wrong turn and ended up somewhere they’d never been.  Among them was local goatherd and fossil hunter Sammy Lokorodi. He spotted the first stone tool.  A man who had lived with local rocks and had a feel for their native forms.  The accompanying archaeologists then set up a properly marked and measured dig.  An effective partnership of skills.

Human evolutionary scholars have long supposed that the earliest stone tools were made by the genus Homo… New fieldwork in West Turkana, Kenya, has identified evidence of much earlier hominin technological behaviour. …a developing understanding of stone’s fracture properties, combined core reduction with battering activities… 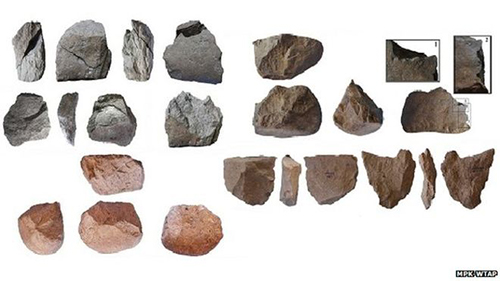 We don’t yet know enough about early hominid culture. Did they build? Did they speak?  The well-posted signs of “this trait is human” drop away like dry leaves. What are we? What can we claim?

Well, we built Rome.  We didn’t invent tool use — but we designed and engineered Rome.  The essence of humans hides there in that gap.

From another direction we share 98% of our genes with modern chimpanzees.  Another gap, and the same one: between nearly human and true human.   We are so close to chimps, but.

Think, an elephant grabs a tree branch to knock down fruit higher up and is rewarded with a treat.  It neither examines nor keeps the branch which only needed to be long-enough and sturdy-enough, once.  The tree made the branch.  Our Lake Turkana hominids however taught themselves which type of rock made a good cutting edge, which made a good hammer.  They shaped and kept the stones with clear uses in mind.  This is the difference between tool use and tool making.  A sea change.

It’s hard for us moderns to grasp how slowly technological innovation trickled at first.  Here are 2.6 million years of progress: 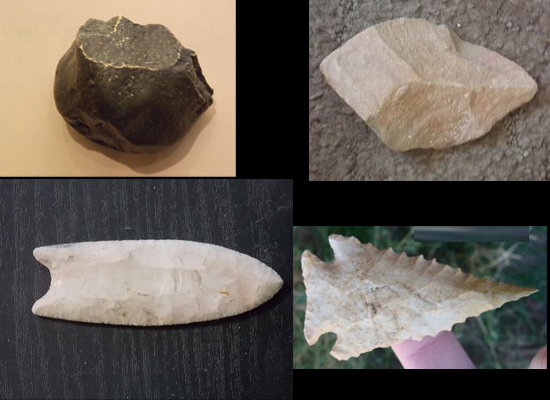 Human evolutionary scholars have long supposed that the earliest stone tools were made by the genus Homo… New fieldwork in West Turkana, Kenya, has identified evidence of much earlier hominin technological behaviour. …a developing understanding of stone’s fracture properties, combined core reduction with battering activities…     via 3.3-million-year-old stone tools from Lomekwi 3, West Turkana, Kenya.  Nature521,310–315(21 May 2015)

At the same time the brain is evolving too.  Cognitive abilities increase.  These newer animals have to learn how to use the new reach of their developing brains and the growing dexterity of their hands. The concept of toolmaking was itself a necessary breakthrough.

The Lake Turkana finds were reported in the May 21, 2015 edition of the journal Nature — less than 2 months before this writing.  Among the reports in that same issue:

Humans built Rome because they could formulate ever more complex problems. At the rate of discovery we’re now accustomed to, can you picture what 2.6 million years more of snowballing knowledge would lead to?  We can no more imagine that far out than the being who crafted the Acheulian hand axe above could have foreseen animatronics singing “Yankee Doodle” at Disneyland today.

Earlier posts that may be of interest: