This is not the post I meant to write.  That one has succumbed temporarily to the infernal heat.  To quote myself from elsewhere,

A heatwave has painted the American weather map in yellow-orange-red zones coast-to-coast.  And it endures like a biblical curse.   This has real effects on flora and fauna, me and you.

This June turned out to be the fourth-hottest month ever recorded—globally… With more heat waves on the horizon, and a big one currently sweeping much of the U.S., the risk of heat-related health problems has also been on the rise.        How Does a Heat Wave Affect the Human Body?, Scientific American

It’s not hard to find heat-wave mortality rates and even stats on heat-related hospitalizations.  But there doesn’t appear to be much literature on the cognitive deficits inflicted by prolonged heat.  And I’ve got ’em.

You may live an air-conditioned life.  Where I live there are 3 window air conditioners and nothing on the first floor where cooking, eating and laundry get done.  Even Hercule Poirot’s little grey cells would lose their edge.

Mine have gone flaccid as a Dali watch.  And it’s funny to joke about but unnerving to discover that the sharpness of your mind is unavailable.

Hence this post.  Until the heat relents and I can more nimbly juggle this notion, that image and 3 oranges without mishap I will be posting tidbits — but no reasoned arguments.

I’m not suggesting that you or I are at immanent risk of death-by-heat-wave.   But even healthy specimens need to keep hydrated, children and older people more than others.  The effects of heat accumulate — meaning the body’s stress mechanisms get increasingly taxed.  Please take good care.

And we should start taking the stressed-brain stupidity factor more seriously.  We’re not incapacitated, but the IQ’s shaved.

To understand your own predicament match your location’s current temperature with its humidity rating. 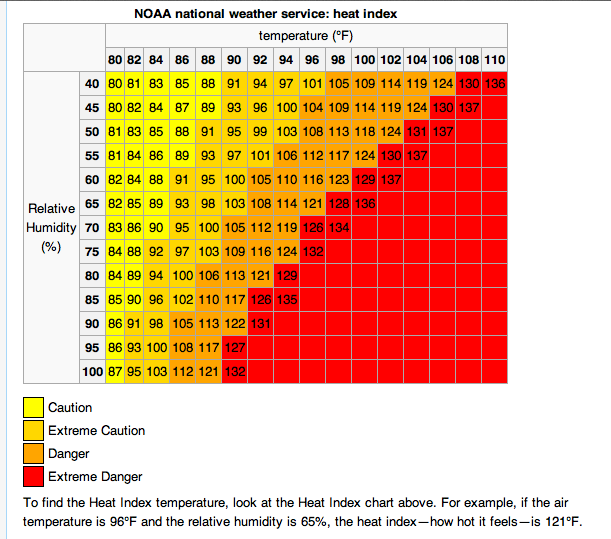 from Life During Wartime, by the Talking Heads

Sloan, I hope everyone gets to see this.

Here in my part of Texas, we have actually been a bit cooler than normal (so as of this moment, the heat index is about 90 with 86 temp and 56% humidity), but it’s going to crank back up next week with highs around 98 at the end of the week, still below our usual 100+ this time of year though.

Stay cool… I did a complete cleanout of our window units (we don’t have central air in our apt), so they are working more efficiently.

Here I thought in Texas an apartment would have to have a bathroom, the merest kitchen and central air. Thanks for the tip — never thought an AC was clean-out-able!

We do have the first two ingredients… Our apartment is detached, above-garage unit. Which brings to mind the joke “Why are they called apartments when they’re all stuck together?” It belongs to my step-father-in-law (AKA our landlord), and it was built as something temporary and I have since made it more permanent, although said landlord has not seen fit to install central air (but has mentioned it in some of his less than sober moments). My current goal is to get us relocated – it’s just not enough space as the kiddos get older. We have fans in each room… Read more »

Terry, dear man. First, if I took screws out of an AC it would never agree to work again. This much is clear. And if you’re living in a former recording studio then I hope you get to record a few yodels before moving on.

I accidentally(?) left the AC on in my office overnight, for which I should be flogged, but it has been chilling the contents of my cranium all day.

Oops, let me clarify… The thoughts are not gone when the post ends…

The apartment wasn’t “temporary”, I meant to say it wasn’t initially meant as a place of residence. It was originally built as an office and recording studio.

https://www.youtube.com/watch?v=p8lXYWXJfHQ We hit 100 this week with no end in site. I read an article about the measuring of the heat index, and I found out they measure it in the shade. yeah…..so if 90 feels like 100, what the hell does 100 feel like? Oh yeah, hell. ha. I used to know someone named Terry….(yeah that’s a big fat guilt trip laid at your door, oh I will so go there) even though we have central air, when I get home from picking Molly up from summer camp she goes into the freezer and gets us both an ice… Read more »

I miss you too, sissy! It’s really (like really) good to hear your voice.