Since the word computation harks back to the 1400s you might reason that the modern efflorescence of “computational” arts and sciences was based in mathematical calculations.  Half right.  Other half is the extra-human capacity of computers which now take those calculations to an nth degree.

Mathematically possible but previously unattainable numbers are now being plumbed. Computational has come to mean math-based at a new and as yet unfamiliar scope: titanic. Computational origami, computational botany, computational medicine.  Name your subject and slap Computational on the front.  Now you’re an explorer who asks where you can travel in your field powered by rocket math.  Boundaries in many fields will change.  Terra incognita: reshaped.

How about the old tale of the rice grains and the chessboard?  The king is owed a lot of gold by an enemy but he offers to let the debtor off the hook thus: he drops a grain of rice on the 1st square of a chessboard, then two on the 2nd square.  All the debtor must do is to continue the pattern until the last square is filled. 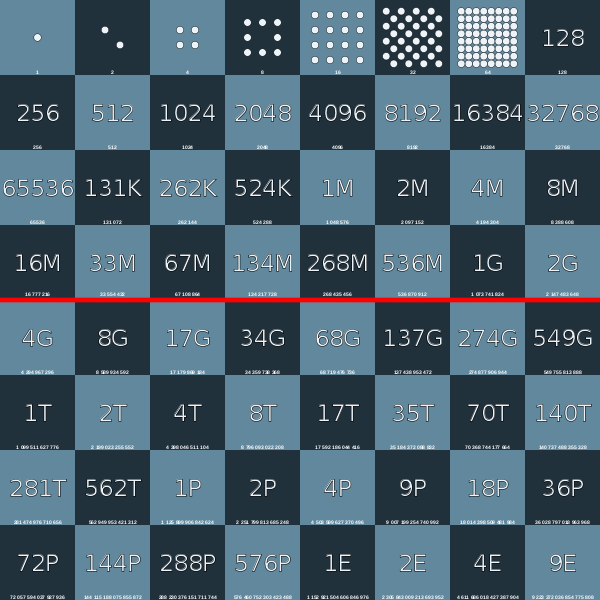 Grains and Chessboard Problem        via Wikipedia       [More about the red line at the bottom of this page.]

Think of having to pay for the oxcarts alone.  Yet this is a number first recorded by the Persian poet Ferdowsi before the year 1011.  Recorded.  Already humanity had developed sufficient mathematical tools to solve the problem.  (How the poet got it to scan inside his poem I don’t know.)

Consider this when you approach the new computational arts and sciences.  They’re truly pushing into territories where humans have never been able to nose around before.

Computational Origami is for modeling the ways in which various materials, including paper, can be folded.  [see more below]

Erik Demaine and his father Martin Demaine, both faculty at MIT, create Curved Crease sculptures which are shown by galleries and museums. 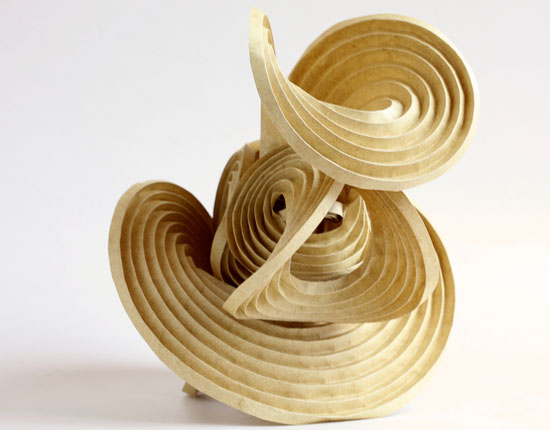 Pushing Curves to the Limit, #5 by Erik Demaine and Martin Demaine     via erikdemaine.org 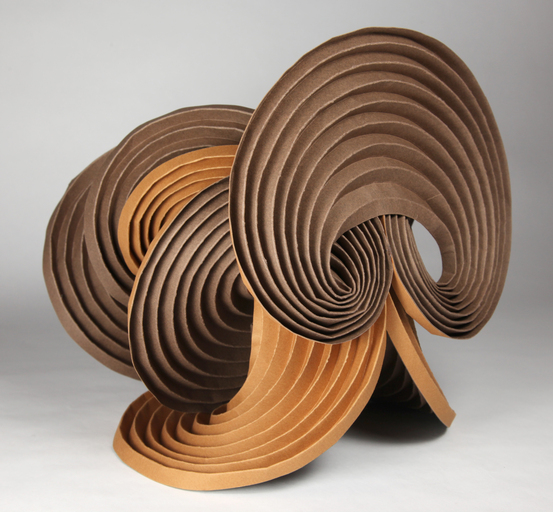 Earthtone Series, [0262] by Erik Demaine and Martin Demaine       via erikdemaine.org 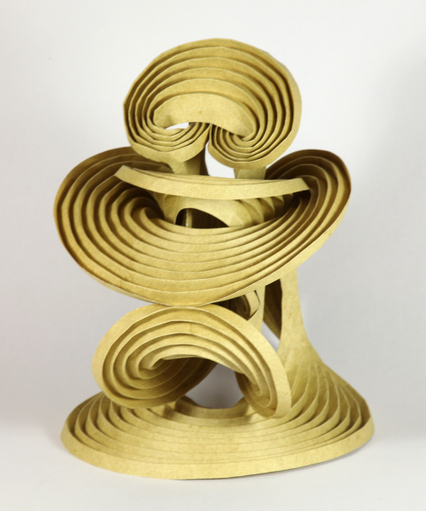 Simons Series [0238] by Erik Demaine and Martin Demaine     via erikdemaine.org 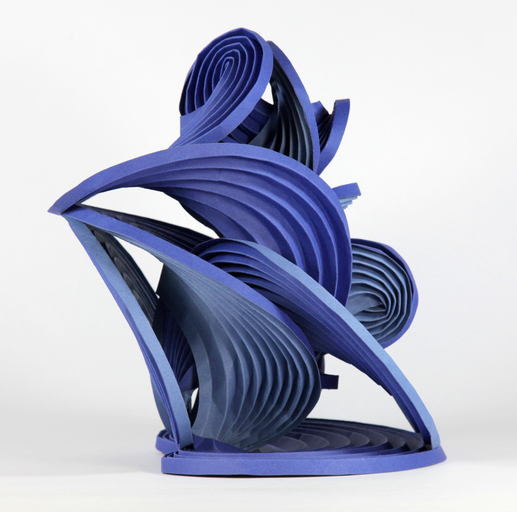 From Kentucky Series by Erik Demaine and Martin Demaine     via erikdemaine.org

“Being creative is not so much the desire to do something as the listening to that which wants to be done: the dictation of the materials.”             Anni Albers quoted on improvisedlife 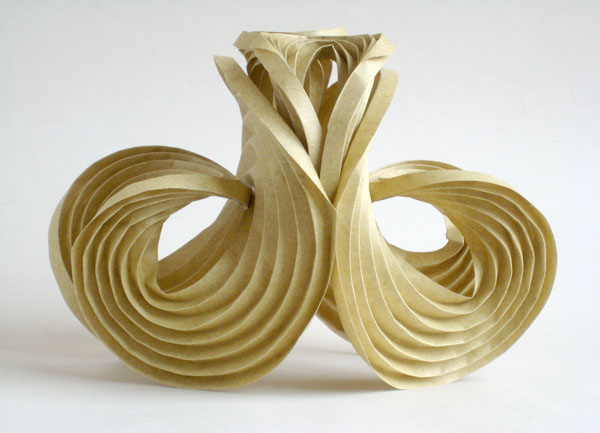 Pushing Curves to the Limit, #4,  by Erik Demaine and Martin Demaine          via erikdemaine.org

Each piece is a combination of between two and four units, where each unit is hand-folded from one circle of paper with a circular hole and hand-scored concentric circular creases. The pieces are combined by joining a few key points together; the rest of the shape is formed from the natural equilibrium of the paper.         Erik Demaine, Pushing Curves to the Limit

The dictation of the materials and the natural equilibrium of the paper.  Yes.  The origamist’s choice of paper influences the form and feel of every finished piece.  Does it slump gracefully? Hold a pose with military starch?  Is it translucent, thick and grainy, Kraft-paper brown, flecked with mylar sparkle?

Imagine how future computational origamists will use math and eye to incorporate patterned paper into an even higher order design. 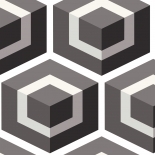 Michael Hansmeyer’s computational architecture inhabits a whole different realm.  Compare the wallpaper hexagrams just above with his Stacked Hexahedra below. 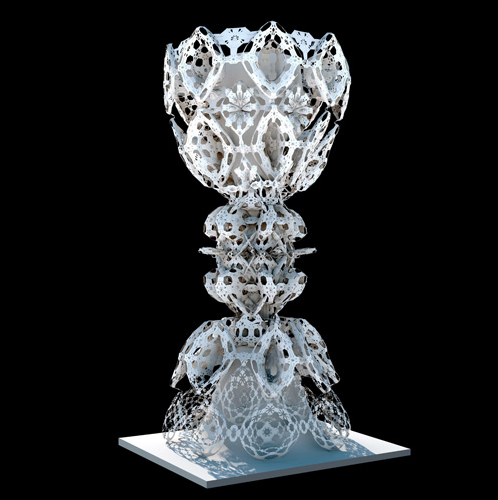 This project begins with the most primitive forms, the platonic solids, and repeatedly employs a single operation – the division of a form’s faces into smaller faces – until forms of an astounding complexity are produced.       Michael Hansmeyer

Dodecahedron by Michael Hansmeyer          via michael-hansmeyer.com

For the first time, complexity is not an impediment to design and fabrication. Rather, it is an opportunity that is waiting to be explored. For years, it was information technology that constrained architects. Arguably, this relationship has reversed: it is now architects who are constraining the possibilities of information technology.     Michael Hansmeyer

Tetrahedron and Hexahedron by Michael Hansmeyer       via michael-hansmeyer.com

These last two by Hansmeyer are obviously from other series.

Red line on the chessboard diagram

I can’t help but see Nodewerk here. Amazing to see such designs in 3D. How big are they?

Not Nodewerk by a CPU mile. Tho it could swing this kind of thing if Mario [software author] put his immense brainy shoulder to it. The paper ones seem to mostly be under 12″ length x width x depth. May depend on the heft of the paper. Hansmeyer’s work seems to vary. I included an image of a human hand for scale. My guess on the pavilions is that they’re not yet realized. The Platonic Solids series I dunno — but would like to see 3D prints on real-life pedestals. Tricia my friend I ‘m so happy to have your… Read more »

I was thinking Nodewerk, too, but it would take a lot of CPU power to create some of these. Ice cream, Chinese fans and frosting were others that surfaced. 😀 The *-hedra are stunning. I want to explore every surface to see if I can get the whole complexities to fit inside my mind, building it a layer at a time, not unlike a 3D printer (which is another thing I thought of), until it is firmly fixed and re-callable at any time . A sadly impossible task, but the appreciation is sure fun, and the pretty pictures are always… Read more »

Sloan, your dry yet savory and jaw-dropping, guffaw-inducing humor is such a treat. It tempers so well with all the information you present. And the presentation is done in such a good informative way! LOL! How’s that for redundant? I mean to that your teaching sessions (that’s what they are to me, anyway) are so personal, like you were sitting there across from me explaining things in a natural, conversational way that makes it easier to absorb. Your passion shows and makes it so interesting, even beyond the appeal of the content itself. The grains of rice offer is the… Read more »

Ah, my warmed cockles! “teaching sessions (that’s what they are to me, anyway) are so personal, like you were sitting there across from me explaining things in a natural, conversational way that makes it easier to absorb.” I never set out to do this but realize that indeed it’s happening. Something in there is eager to have my notions understood. Love the prime number article. Expect to see some of it soon — something I’ve been trying to write about. “Just finding one large prime number is a fun puzzle to have solved, but it doesn’t say anything basic about… Read more »

Turns out my “couple of days ago” in my computer time was July 23rd. I really like Chrome’s history search feature! 🙂