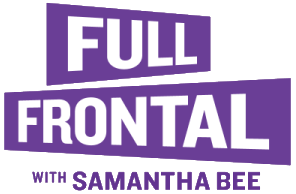 Samantha Bee is the only one of he Jon Stewart fraternity — but Samantha Bee was in there — the Jon Stewart sorority? — well but Jon, Steven, Larry, John — so what’s Samantha Bee doing in there? Contrast! Of course. Women can count…. to one.  Couldn’t have women outnumber the guys. The show would start giving off bad smells.

As I was saying, Samantha Bee is the only one of the Jon Stewart lineup who got a solo show — wait! they all got solo shows! ah, but wait! — peppered with commercial breaks that impinge on the comedy. And you have to click again to continue.

This says to me that she’s ended up with the short end of the stick. Short and unfortunately smirched. Grab on girl, because it’s the only stick we’re offering you.