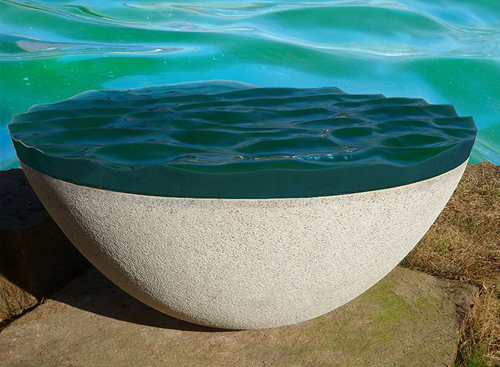 The Sea Between Us by Alena Matejka. Cast glass and granite, Unique copy of Mesozoic seabed surface.

Antaeus is the bloody human-killing giant from Greek mythology, son of Poseidon and Gaea, or of the Seas and the Earth.

Certain contemporary artists create works that connect me with a sense of the elemental, non-geographical Earth.  I call this work Gaea Art.   Alena Matejka’s glass and granite work (above) is one — mold melted and hand polished glass with a granite base,  206 cm diameter [81 in], 82 cm h [33 in].

This Czech sculptor worked from a casting of seabed from which she then cast a large and unique form in glass.  You see the imprint of a patch of actual sea floor — a Mesozoic formation over which a Plesiosaurus may once have paddled.  [I find no information on the who-when-how of the seabed casting. Please let me know if you can fill in some blanks.]

I’m not suited to deism.  Nothing will convince me that God’s a bearded white guy in a toga.  Nor that she’s blue and has multiple busy arms.  But I recognize an emotion, maybe awe, around life’s mysteries.  A palpable feeling like sensing someone behind you in a room.  Do you remember the Peter Shaffer play Equus?  The boy sees gods where others see, oh, rafters, gateposts, roofs. You’re left to determine — is the child is mad or inhumanly gifted?

Gaea Art reminds me that feeling wonder may be unique quality of humans.  A touchstone to what keeps us wise.

Some other Gaea artists you may want to investigate:

Below is a painting of the Antaeus myth from 1690 that seems to me to bobble the mythic fundamentals. Begging the pardon of my male readers but this seems a male fantasy of personal combat and triumph.  The mythos — the wonder — wrung from it with Herculean hands and the mystery drowned in brawn.  It’s very much about sweaty men, not a bit about forces that humans can’t grasp. 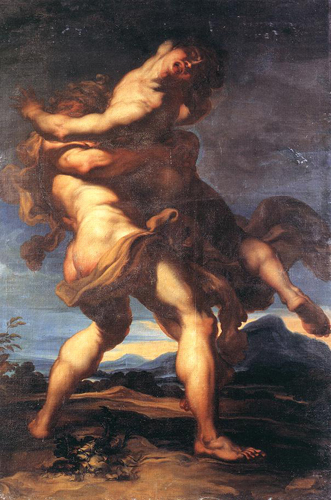 I briefly tried locating a CG graphics version of future personal combat. Couldn’t. The Hercules’ of the future are megalithic composites of armor and weaponry, some without even the hint of human presence within. They come at you in twos, threes, armies, weapons firing. It’s possible they’re too cumbersome for physical combat and must sacrifice the primal satisfactions of bare hands. They must win as machines not as men — Antaeus’s feet need never touch Mother Earth again.

As we search for “better Earths” orbiting other stars.