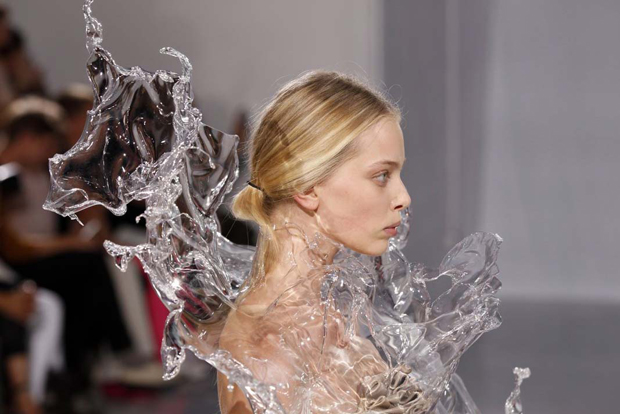 In the high-wattage world of couture, outlandish has rarely been a barrier to success.  So it’s not a stretch that today’s new players include architects and materials designers.  Not fabrics, materials.

The incredible possibilities afforded by these new technologies allowed us to reinterpret the tradition of couture as “tech-couture” where delicate hand-made embroidery and needlework is replaced by code.           via Neri Oxman on materialise.com

A center of gravity for some groundbreaking materials designers is the Dutch couturier Iris van Herpen. She taps them for insights from their studios and university labs and she translates their work to the Paris runways. 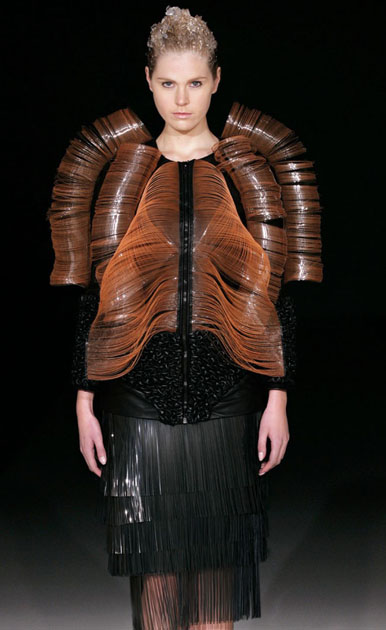 Many of these clothes are not meant for driving, sitting in a booth or on a bar stool, playing beach volleyball or visiting the loo.  They’re theater.  Bjork and Lady Gaga have performed in them.  They’re not cheap tricks — in the best couture tradition they exhibit structural insight and elaborate hand detailing.  And they add new advanced 3D printing. 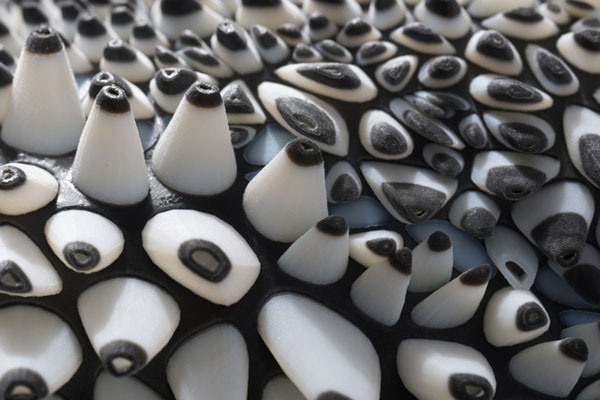 The ability to vary softness and elasticity inspired us to design a “second skin” for the body acting as armor-in-motion; in this way we were able to design not only the garment’s form but also its motion…               Neri Oxman on Materialise 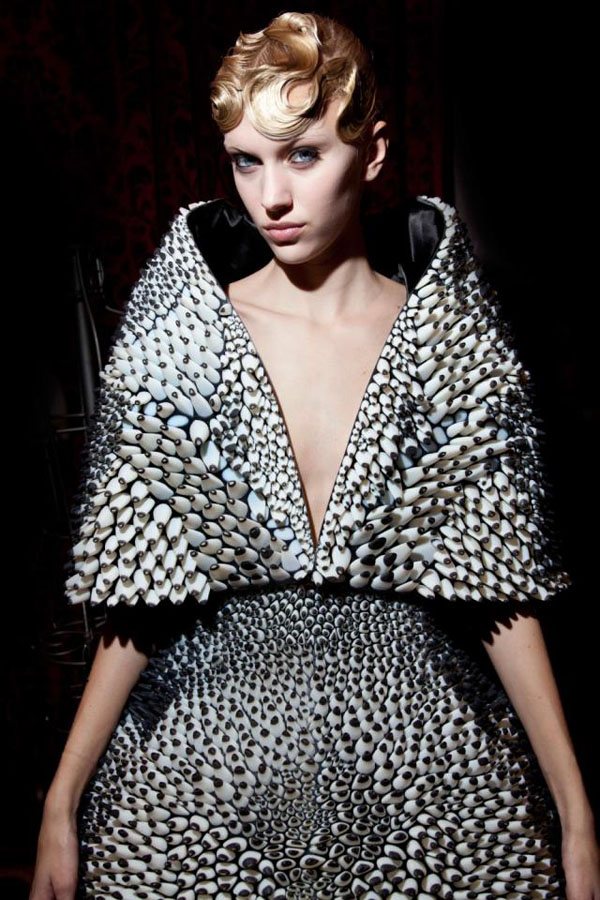 The 3D printed skirt and cape were produced using Stratasys’ unique Objet Connex multi-material 3D printing technology, which allows a variety of material properties to be printed in a single build. This allowed both hard and soft materials to be incorporated within the design, crucial to the movement and texture of the piece.    via Materialise 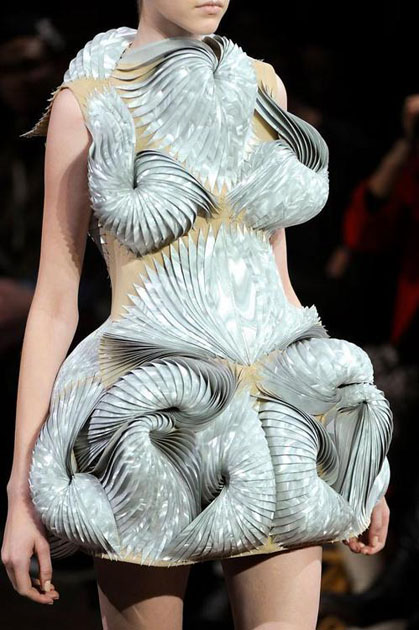 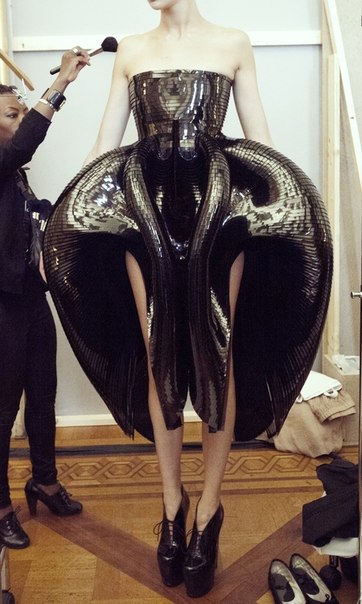 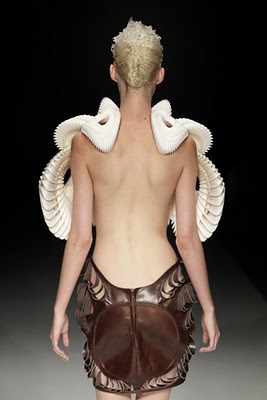 …inspired us to design algorithms that could map physical movement and material behaviour to geometrical form and morphological variation in a seamless and continuous wearable surface. 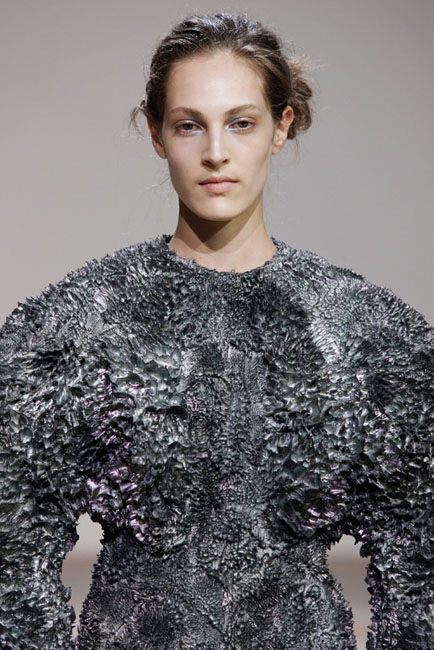 “We have created dresses whose very forms are generated by the phenomenon of attraction and repulsion.”        Jólan van der Wiel magnetics expert, in collaboration with Iris van Herpen 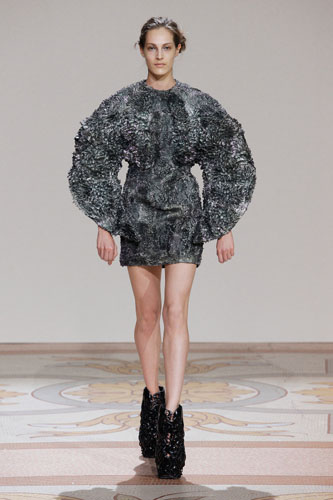 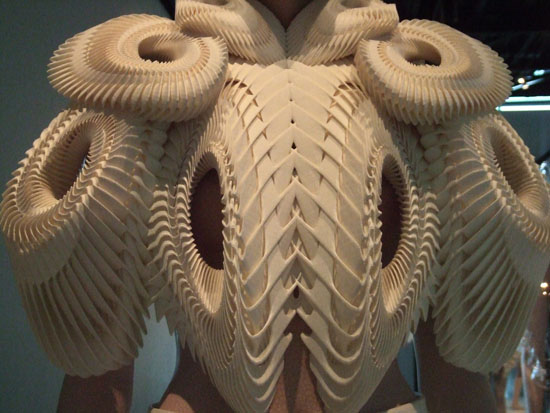 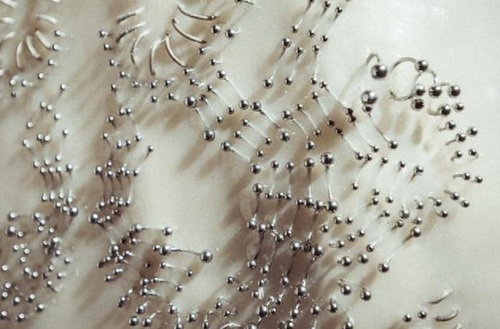 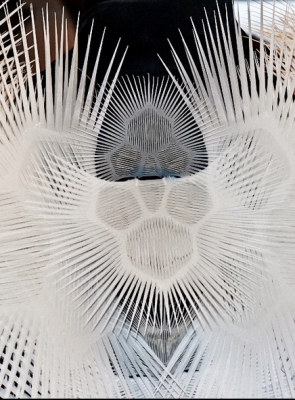 I enjoy many of van Herpen’s designs but what really fascinates me is the force she’s made of herself.

In 2007, she started her own label.  Since July 2011, she is a guest member of the prestigious Parisian Chambre Syndicale de la Haute Couture, which is part of the Fédération française de la couture.

By allying herself with technological pioneers in the exploding materials field she gives herself a conversational relationship with their field.  Her catwalk cred helps legitimize unfamiliar cutting-edge research in the eyes of the fashion world.  The very world they need to energize with fresh ideas.

That van Herpen uses her clout to raise the profiles of other creators is cause for great respect. 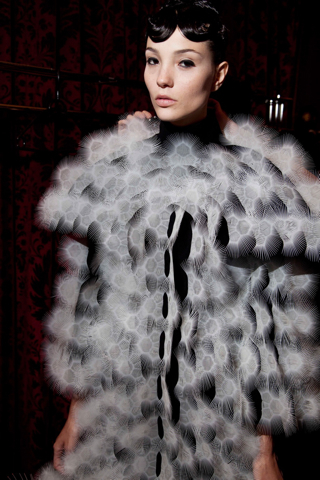 I wouldn’t have thought of making clothing material with a 3D printer, but then that’s probably why I’m not in the fashion industry…

That high-speed camera shot with the water is really cool.

Agreed on the water splashes — wonderfully truth-of-nature. Wait til we have virtual 3d garments — a collar could splash as frivolously as a fountain and never get you wet.