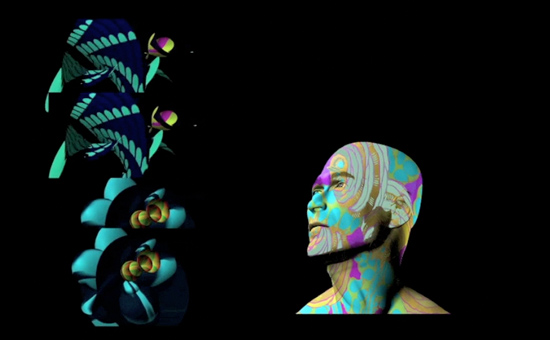 Man Alone with Someone Else’s Thoughts, video and still (click link to activate in new window)

I hit on a new way of making art: combining videos with stills.  The trick was to make a composition from them that worked on its own.  You could frame it.  Then one part of it loops and another stays still.   Here the totem-stack whirls and the head is a still.  It’d be a very different artwork if the stack sat frozen and the head was animated.  Maybe it would turn, look at you, meet your gaze., turn away.  Maybe it would slowly scan up and down the column, checking it out.

Each possibility creates its own meaning.  If it’s got another meaning it’s a different piece of art.

Think about it.  Say I recolored Man Alone, made it all daffodil hued.  If the the feeling you get from it is essentially the same, then it’s a colorized version.  Fabric designers for years have offered designs in varying colorways.  You like that rose and grapes motif?  In  pale green and deep blue?  Or lilac and burgundy?  And it’s unlikely that a pattern with roses in pale green or lilac will come in a third version where roses go midnight blue.  Part of the colorway is a scheme of light and dark values.   Same if I turn Man Alone a sunshiny hue, the disconnect — if it works for you — between the man’s gaze and the dancing forms will hold the meaning of the piece.

If you paint, if you sculpt, if you do versions they’re sketches, maquettes.  Pixel-based art lets you do color versions that have equal polish.  They’re quick, can be individually saved.  Colorways.  I’ll be happy to argue the emotive power of color in another place.  That doesn’t make this incorrect.  We’re addressing what versions mean in a new medium, where facile variations can be a norm.

I make art out of pixels.  My sensibilities were formed by artists who use paint.  Or marble, clay.  I revere Goya and Picasso, Rodin and Van Gogh.  Neo Rauch, Frank Stella, total nutsos like Peter Saul.  And I’ve lived decades spellbound by how computers can manipulate images.  Balancing those two things is the bulk of my art.

We were talking about fabric design.  Part of a homeware designer’s job is to create objects that have null emotional meaning.  Politics, fright, rage, war don’t belong on the tablecloth.  When you’re an artist your job includes choosing from all human emotions.  You can’t make art with giraffe emotions, or even your sister’s.  You can choose to explore pain or you can choose to explore triangles.  If it’s real it comes from your experience of pain, your fascination with three-sided shapes.  If it doesn’t you’re doing someone else’s art.  Good luck.

Artists are linguists from the right-side of the brain.  An artist discovers a visual something that communicates well for them.  If they’re fired up by it they’ll try many versions.  The something they discovered grows into a language they improve at.  Mondriaan’s one example, Monet, Francis Bacon.  Each version is a new question they’re asking.  In paint, in poetry, on the saxophone, the artist stays interested enough to try new gambits.  Or they’re stale and they copy themselves.

Pursuing versions in pixel-based art can turn you into a drone.  This filter, that filter, try it in pink?  Because versions are easy you can pretend you’re attempting something.  You’re doodling.  Your guts are busy digesting, your curiosity’s flatlined.  The real versions we need to recognize in pixel-based art have to transcend the tools.  A filter’s a tool.

I couldn’t have made Man Alone with Someone Else’s Thoughts on a canvas.  It requires pixels, changing states.  And it’s a picture.  My choice in art is to communicate some emotion, to have you feel something you hadn’t a moment before.  Designers are expected to avoid stirring you up, that’s one reason they’re not fine artists.  They don’t have the freedom.

And the duty, to my mind.  If our three-sided-shape person is a real artist you’ll catch their enthusiasm, zeal, seriousness.  None of these are thoughts, they’re emotions.

If you create pixel-based art your job is to draw a line between easy versions and versions.

Your blog is a visual spa, your thoughts a blood pumping workout, the art a massage of wonder and delight. I’ll visit often, with pleasure and anticipation.

Man Alone With Someone Else’s Thoughts is such a favorite of mine because it is so thoroughly you.

Thank you for all of this, Sloan, it’s a room with a view.

My friend you are among my ideal readers — brainy, zestful and zany. I’m very glad you’re aboard.