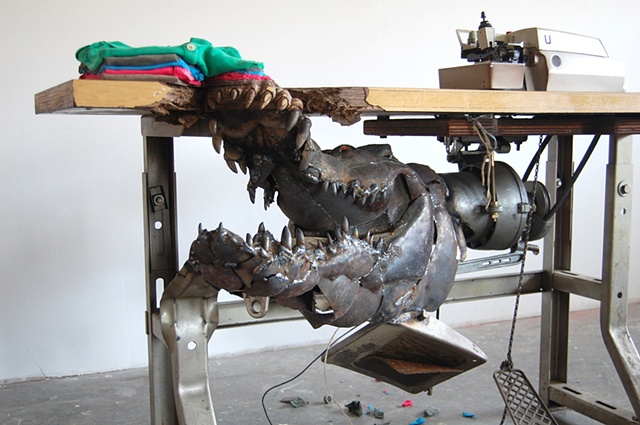 This arresting work by Canadian artist Maskull Lasserre is titled Allegory.  My left-leaning brain was sure it was an allegory of sweat-shop garment workers rising up in wrath.  Oops.  Lesson A in just how slippery the word allegory can get.

To start off, the piece was commissioned by Lacoste — they sought a work that incorporated some of their polos.  I want to admit that the Lacoste company has raised my esteem of corporation mentality several notches.   This is one hell of a work to OK — all praise to them for their aesthetic guts.

Allegory.  In Lasserre’s words, “There was something analogous about how textiles were stitched together from a pattern, and how the crocodile head was welded out of small pieces of formed sheet steel.”   Lasserre minored in philosophy in college so he must be aware of the odd fit that Allegory makes for this piece.  But Analogy hardly works for a sculpture that’s mythic.  Inexplicable, logic-twisting, masterful.

Now add in the fact that part of the crocodile’s snout isn’t steel at all — it’s carved from the wooden sewing table and nipped out of the polos.   He meant to combine both the additive and subtractive techniques of sculpture in a single form.  Or flip side: to see the crocodile’s steely muscled toothy mass continue on into the absence taken from the wood and shirts.  This is true to Lasserre’s vision of a reality beyond easy semblances.  And it complexifies the meaning, squares it, cubes it.

Compare Lasserre’s message, which can’t be fully articulated, with the vanitas stillife, a macabre niche of historical allegory.  Each object on the table below has a meaning, embodies a meaning, the skull the impermanence of human life, books the impermanence of human knowledge, purple silk the fleeting good of luxury.  The illuminated void of nearly half the painting is spirituality forevermore.  In the 1600s if you couldn’t decode this painting you were seriously out of touch.

I respect the Lasserre Allegory because it leaves us to find — or feel — a meaning in ourselves. 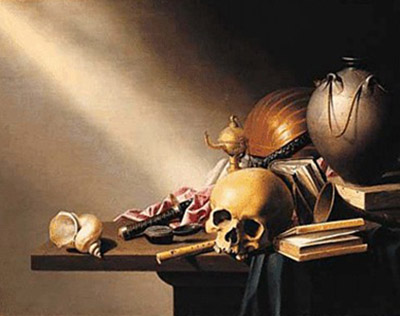 An Allegory of the Vanities of Human Life by Harmen Steenwyck     via artyfactory.com

Here again is the slithery nature of allegory.  We all seem to agree that Spring is depicted (though I’m not clear that Botticelli named it that), but a host of would-be scholars have each seen something else depicted and have laid out evidence for their views.

I think that you can circle details, draw arrows, link this with that over there, but you can’t prove a thing.  At least if we’re talking allegory — Botticelli’s reasons were buried 600 years ago.   He cannot have been immune to the thoughts and happenings of his day, but whether he painted a detail with allegorical intent (skull in a vanitas) is not accesable to research.  Scholars like all the rest of us project some of the meanings they detect. 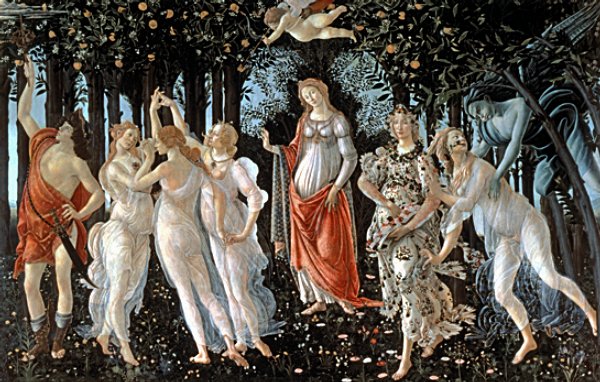 Primavera by Sandro Botticelli     via sandrobotticelli.net

I want to return now to Lasserre’s art via this ravishing detail by Botticelli.  Stop and feast on the skill — the hair, skin, diaphanous draperies.  Botticelli’s mastery of paint.  I also admire Lasserre’s skills in sculpture. 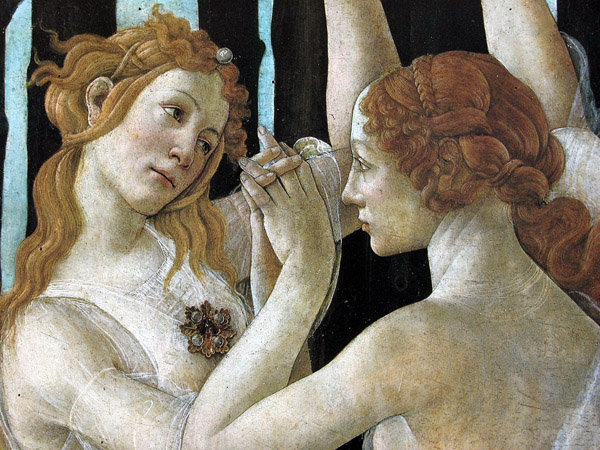 Primavera detail via Living in the Lot

While I don’t argue for Lasserre’s Botticellihood, what follows here will give you an idea of his skill and inventiveness with materials.  This is as close as I can get us to steel crocodile teeth, that voracious lunging mouth.  Expressive, impressive, convincing. 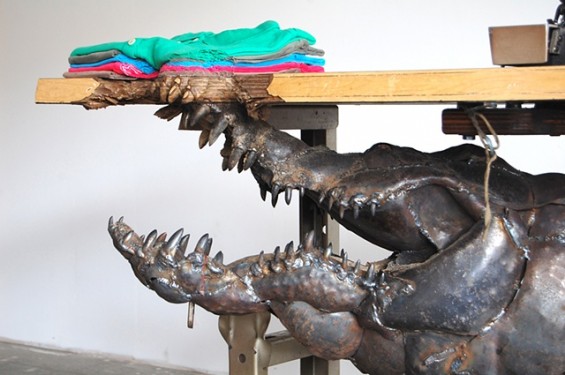 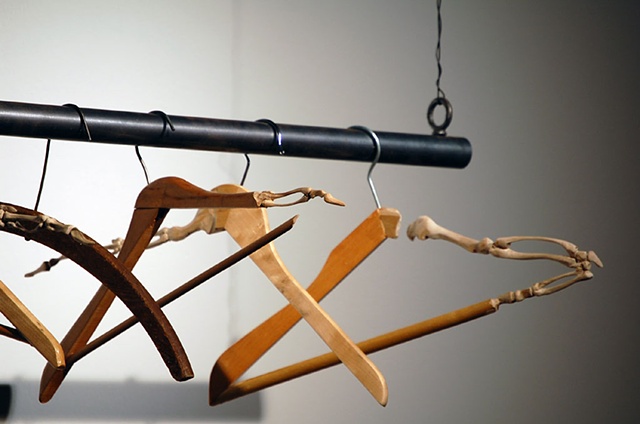 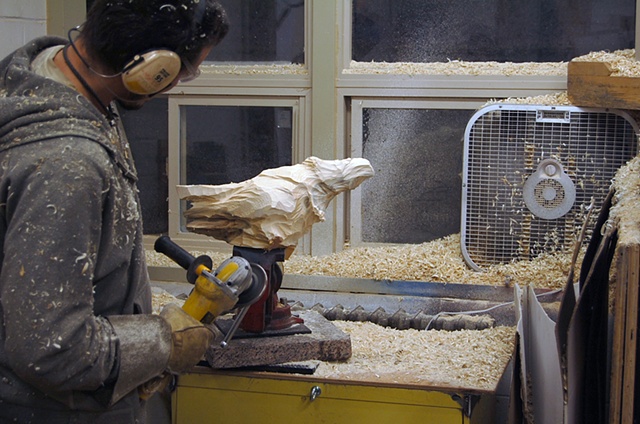 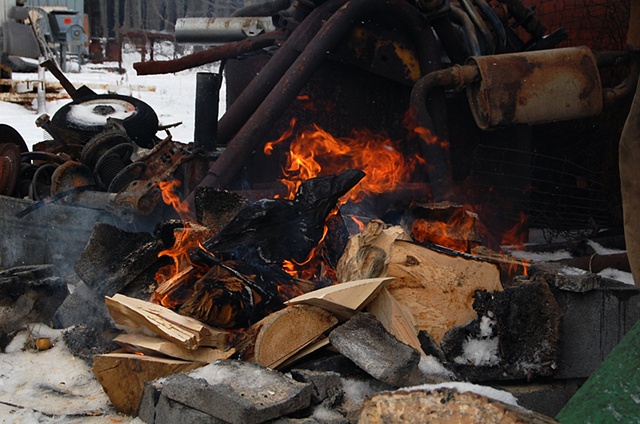 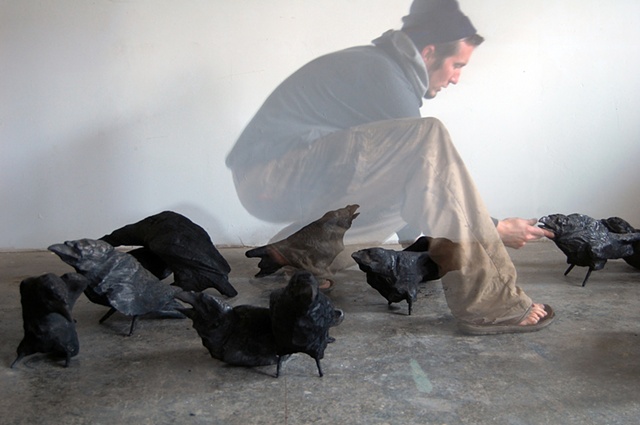 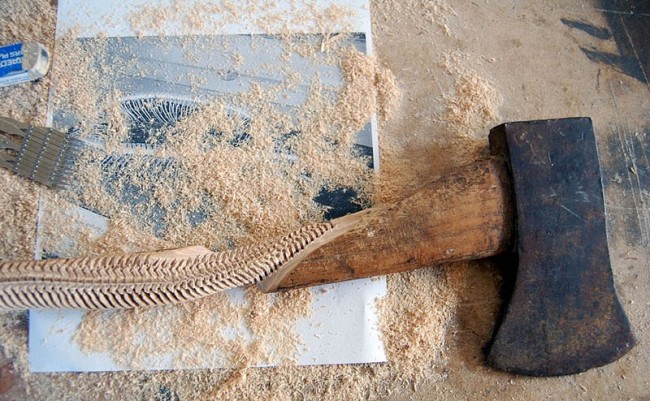 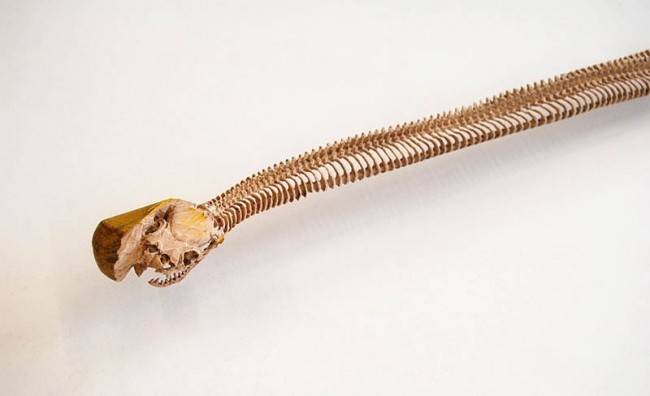 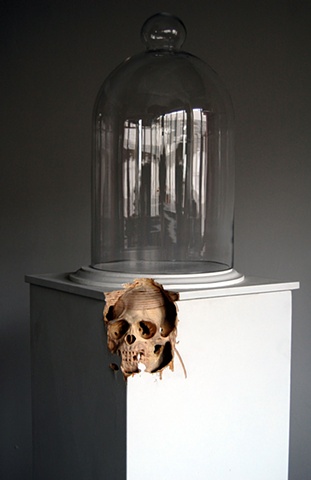 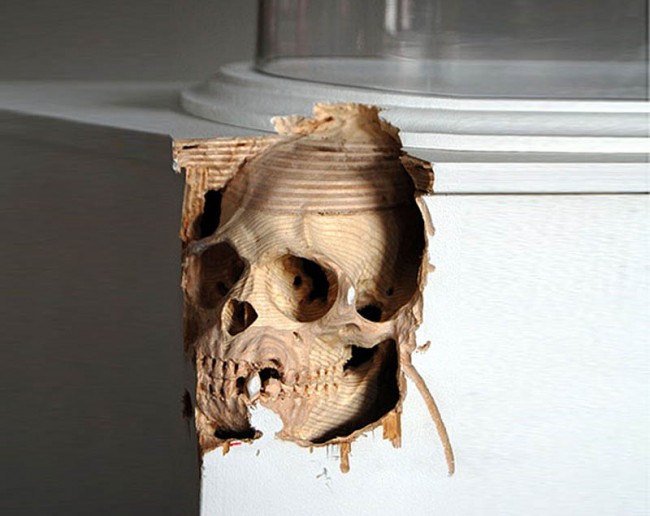 Is this a vanitas?  Or something more, less, Other?  I crave more pith, more myth than I can get with Schoolmarm Allegory intoning what’s what. 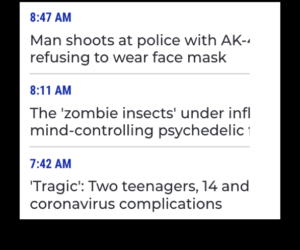