Up until about 150 years ago the only recording devices on earth were humans.  We notched bones, painted caves, tracked the planets, told history in hieroglyphs.  We have records from the Ice Age forward. Robins don’t notch their tree to keep track of the nestfuls they’ve had this season.  Just us, with our language skills and our big brains, we keep track of things.

We began to document by counting and by picturing.  Those oddly-proportioned horses painted at Lascaux? They looked like that back then.  Our ancestor humans recorded their form.  Today scientists can analyze fossil bones and deduce mountains of minutia about those ancient horses.  This is fascinating, but doesn’t resonate like records made by living hands.

Another way to record,  say an epic saga, is to have designated people in society whose prodigious memories can pass knowledge down the centuries.  These were records too, but we can’t discover them.  Then when writing developed, stories, songs, the invisibles, got written down.  Think about some six thousand years of hand-scribed clay tablets, papyruses, parchments.

Until the printing press hurtled humanity in new directions.  At first it didn’t even record, it copied what had already been recorded by tired-eyed monks.  It came along in the 1400s, as the recording techniques of painters and sculptors were getting more precise.  As explorers sailed out toward the unknown.  As critical thinking arose and scientific investigation, with its arguments and dialogs, got underway.

Now there is recording, and there is having something to record.  The pomp of a visiting medieval prince’s entry into an ally’s capital could take a full day of caparisoned horses, music makers, bejeweled lords and ladies, craft guilds in gaudy livery, all chronicled with the meticulous eye of a society reporter accountable to the king.  But back when Lascaux was painted there would not have been the head count, the organizational skills, the silks and stranded pearls.  They painted what they knew.

And for long ages all that humans knew was what their eyes could see, their ears could hear, their imaginations believed.  The complete outer limit of the known world was what your group picked up from travelers.  Even in Paleolithic times there were curiosity and trade.  But societies until very recent times have had frontiers where their geographic and cultural knowledge stopped.  Their worldly perimeter — beyond which, air and question marks.

Eurasians are thought to have reached the Americas some 12,000 years ago, but they don’t seem to have kept the memory of their far-off home.  On a new continent they forgot about a wider world and their perimeters now ended in the new.  Vikings, Kon Tiki, the Clovis People — humans seem to migrate and forget.  But the Western world had grown into chroniclers and when they launched out across the seas they wrote and mapped.  Then the compass of the human world exploded.  These people recorded, they learned, they did not forget.
Humans also found new ways to explore without embarking on sea voyages or treks.  Magnifiers, fire starters were known 3000 years ago.  Eyeglasses came along less than a 1000 years ago, extending a myopic’s knowable world.  But about 500 years back optics begin radically expanding the human perimeter with microscopes and telescopes.  We saw wild new things and drew them, we developed technologies to document in unimagined ways.  Think how familiar we are with a fruit fly’s close-up beauty shot.
Scientific instruments were developed — here it comes, fast as it happened in the arc of human history — Galileo sees Jupiter’s moons with a telescope, Herschel discovers Uranus with a better one, Daguerreotype portraits become de rigueur, Edison invents recorded sound… Charlie Chaplin, CinemaScope, Avatar.

Photron and GelSight are among the new technologies for capture and display that this blog will enjoy investigating further.  Geek love, yes, but the artist in me sees that art will take these devices further than their makers can imagine.  Artists and their quirky, deep-seeing, strange right brains.
<< Older Articles

Storm waves.  Think of the power — to pulverize, shove, snap to pieces.  There are photographers who face these seas.  The images they return with are both documents and art.  The three photographers below are well worth attention.

Alessandro Puccinnelli captures the power of the waves.  His images grab their explosiveness.  Look at his tones.  His cropping — which can change from one shot to another.  His visceral focus and the immediacy it brings.  He says, “To some extent the sea is my guide through life; I think of the sea as an example and a source of knowledge.”

I remember when I first saw his Intersections project (which these two photos are from).  My inner jaw dropped and my heart yelped yes.  I grew up near the sea, I understand how nourishing the sight of it can be.  Interesting that in his commercial work Puccinnelli chose to use a very “loose and free” approach.  How unlike the intensity of his sea. 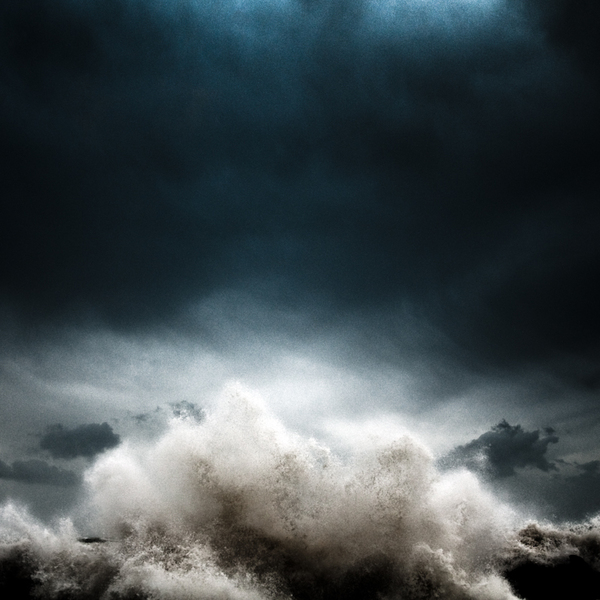 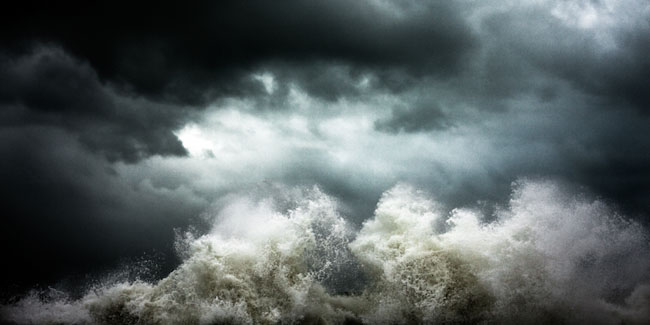 two above photographs from Alessandro Puccinnelli’s Intersections project, via his website

Clifford Ross gets into hurricanes.  He wades into the surf as it roils toward him, tethered by a rope to an assistant on the beach.  Think of that as these combers come at you. 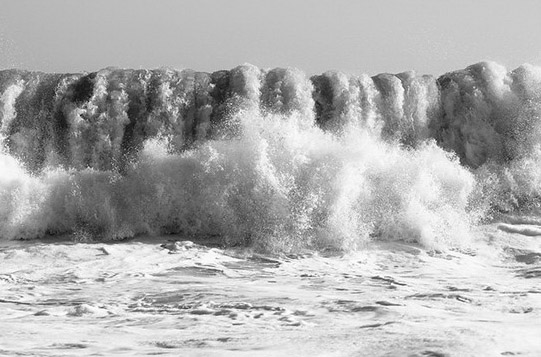 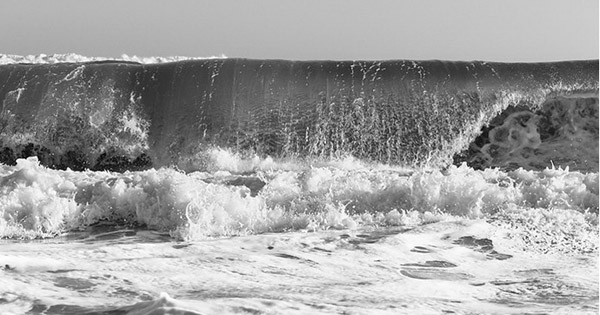 Ross is an exemplar of contemporary art-meets-technology.  He created and patented an unprecedented hi-res camera — because he saw a mountain to photograph and existing technology couldn’t give him the detail he imagined for it.  He inspired a cyclorama project and made a video animation Harmonium Mountain with music by Philip Glass.  A fascinating human, I suggest you explore some of the extra materials listed at the bottom here.

Think of gluing all the continents together, Africa, Eurasia, the Americas, the poles.   That’s a boggling lot of land.    You could step off the curb today and begin to walk, eating, sleeping, aging as you go, and never walk the girth of vast Pangaea.  Generations would have to take up your task.

Yet dry land is but a pittance of Earth’s surface.  Salt water covers some 70%.  When ocean waters get riled they’ve got a lot of weight to heave around.

Below are photos of a storm in the Black Sea.  Lives were lost, five ships sank, an oil tanker broke in half, 1000 tons of oil were spilt in the churning sea.   The photographer of these disturbing shots isn’t credited.  I thank whoever held the camera for their practiced skills when this hellish storm slammed into view.  These aren’t snapshots.  But all I know is that Russian bloggers processed the film and posted these HDR visions soon after the storm. 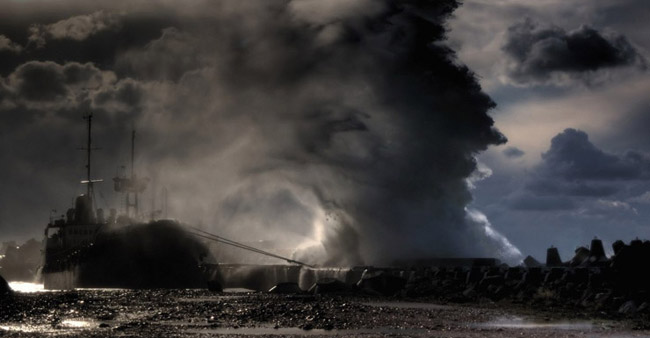 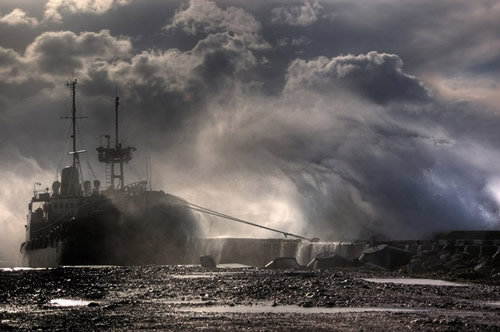 The power of the sea indeed.  And the power of humans to record — which is the next topic of this blog.

In this launch of the Green as Sky  blog I welcome you to all I find fascinating — and hope that you’ll find delight here too. I’m a seasoned artist, a geek, a lover of small evocative facts, the way animals move and how artists make what wasn’t there before.

This splendid d makes a great starting point for the blog.  It’s by Ruslan Khasanov, a Russian artist whose creative process should make you grin.  Particularly if you’re an artist.

He was painting letter forms, ink on wet paper, trying for a melting-away look.  When he went to clean off his brush he painted an idle d in the sink and there it was: the beauty of a liquifying form.  He was savvy enough to grab his camera and a surprising alphabet was born.  We start with Khasanov’s d because I want this blog to celebrate the human impulse to create.

Think of it: you’re at the sink to wash a brush.  And you make a playful gesture.  Which is rooted in your curiosity about letters, wetness, ink.  This is a perfect artistic moment — the hand tries something it wasn’t there to try.   This is the creative spirit.

And Khasanov’s d gives us another equally important  lesson in creativity.  He knew what he saw when he saw it.  He didn’t just see ink dispersing, he discovered beauty and value in it.

Lesson number three is that he was moved to act.  Art in the brain (Aha, then nothing) isn’t art.  You have to capture it.  He might have reached for paper, tried to blot or make a print.  Khasanov grabbed his camera.  What you see above is an animated GIF, a compilation of numerous rapid camera shots.  It’s a brilliant answer to, How do I capture my insight and make it art?  Still photography and digital knowhow.  We see how a real artist can make them potent  — far more wild and affecting than straight video.

I keep trying to imagine how he drew letters with one hand and triggered bursts of unwobbly photos with the other.  But of course he improvised.  A practicing artist already has tools and knows how to get results with them.  This isn’t part of the impulse to create — its a fruit.   The confidence you earn, your bag of tricks, the means to act.

Ruslan Khasanov’s ephemeral letters are superb.  Beautifully crafted, gorgeous and satisfying to watch as they lazily cycle. Typography is in something of a Renaissance as digital screens expand the possibilities.  What once was a floridly embellished initial capital can now dance — or disappear.

I also love this d because it’s cryptic.  It starts in your verbal brain: d.  It transmutes into wordless shapes and flows away.  Your nonverbal brain also gets to participate and be fed.  I trust cryptic.  Isn’t that what illuminated letters are about?

For the rest of Khasanov’s fleeting and mesmerizing alphabet see Liquid calligraphy at his website.

I want to express a heartfelt thanks to my generous and gloriously geek-brained friend Mike for creating the WordPress theme (or template) for this blog.