Whenever I go somewhere I come away wondering what I’ve missed. In Paris not what streets I didn’t follow, but rather on the trodden streets what I missed while looking at it. Did I drink in the cathedral’s master architecture and miss the robin on Mary’s marble toe? Its gimbaling head ticking quickly in all directions, for food, for foe. Or have I watched tree shadows gyre on a wall and missed the parade?

I’ve spent a month in Paris, thinking I could post here diligently daily. I must apologize — I gave Paris my all.  Walking miles, gawking (which is hard for me unless I’m still). Soaking in Parisians being Parisian the way Jane Goodall would observe wild chimpanzees — if she was a chimpanzee.

What I was watching for of course is what made Parisians unlike me. Not that they don’t breathe in air as we New Englanders do but that their Paris air is drenched with sex pheromones. You don’t see them but Mama if you don’t feel them my condolences to you. Matrons wear their breasts high and proud; it’s clear which men dress to the left and which to the right. A couple wedged at the next table in a restaurant, tall, well groomed. It’s possible that she never took her eyes off his all night. Next to her, arguing issues with my partner, I feel a buffoon. She’s so smooth, so elegant. They shared an ice cream dessert but she didn’t spoon in until he nudged the dish toward her.

Was their dinner foreplay?

You’re right, how the hell would I know?  It’s just I’ve never seen an American woman gaze so pointedly into a man’s eyes for a three-course dinner — but it felt like a mode both Parisians were well-accustomed to. Bien sur.

The shopping carts shown at top sat lined up at our local grocery store. To me they’re part of the Paris je ne sais quoi, the something that try as I might cannot quite be put in words. Their keen and twitchy nose for style. 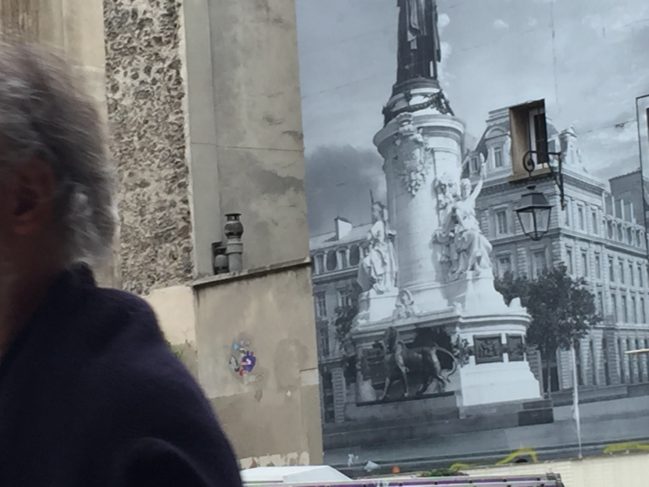 Now You See It, Now You Just Thought You Had.  Poster and church, by Sloan Nota.

Paris is simultaneously so many adjectives why pretend yours is more valid than Jean Paul the taxi-driver’s, or Walid the TV historian’s or Julia Child the famous chef’s? So here are some photos to convince you I’m not in Kansas anymore.

The 3rd is partway through a gentrification.  It’s the hot and hip area which doesn’t vary enough from continent to continent to rouse much interest. However it’s deliciously placed and myriad destinations are walkable from here. 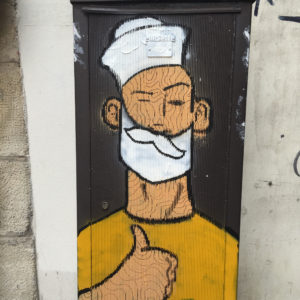 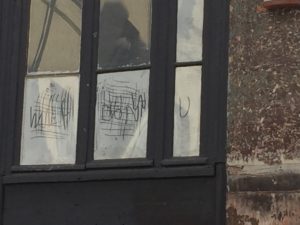 In New York you’re aware of the firm grid of streets and avenues above the southern morass of cow paths. Here major streets continually meet in mad stars of traffic, red and green lights (small by US standards) control traffic in wheeling directions — pedestrian, two- three- and four-wheeled vehicular. You haven’t lived till you find yourself staring into the intense face of a suit and tie bearing down on you on a speeding motor scooter.

I remember a long-ago dinner with an inane male type who boasted of having had his Mustang shipped to Europe. Oh so many streets he couldn’t have fit down let alone parked. Yesterday on one such street there was this sign on the left, 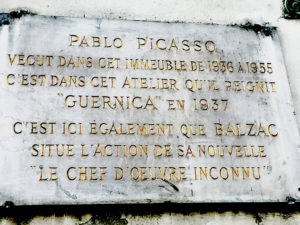 Two or three steps across the street from this another building with a sign in stone, 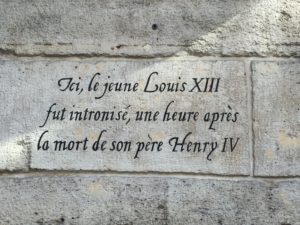 Paris sign where Louis XIII became king an hour after the death of his father Henry IV.

History. The lives that have left their traces in Paris. Sure, maybe someone fudged a few yards on where Louis XIII became king but in the US the best we’ve got is the old saw ‘Washington slept here.’  Something sacred about this much significance ladled over the same patch of earth for continuous years.

Yesterday we found ourselves witlessly traveling along the back of the gendarmerie — countless navy-blue busses backed toward the building (the better to roar into action), Impeccable grillwork encapsulating each back-up light. Buses, police buses — for what other reason than massive mayhem? Yet France has its reasons. We are not frequenting large gatherings of people.

Yet on this same walk we passed massive doors into the building. Some wag had snapped a bicycle lock onto this ferocious lion-and-snake door-pull 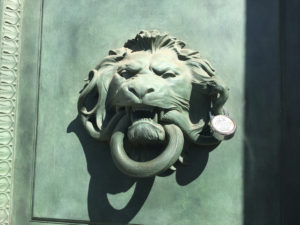