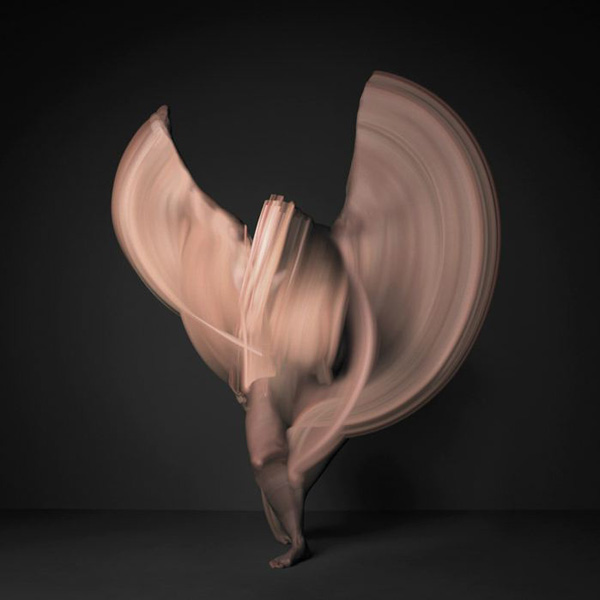 Here’s new work from artists we’ve looked at earlier in 2012 — let’s close out the year with art full of new life.

These earlier works by Shinichi Maruyama, visceral flings of fluids treated as sculpture, put his newest work in context.  These beauties were captured with a quick camera snap — the detailed split-second frozen as art.  His new Nudes turn his use of a camera on its head, leaving the shutter open for an extended exposure.  Instead of fluids, a nude body’s vigorous antics become a beige-pink mirage of fluid.  Still that same fascination with winging form but completely new and now human. 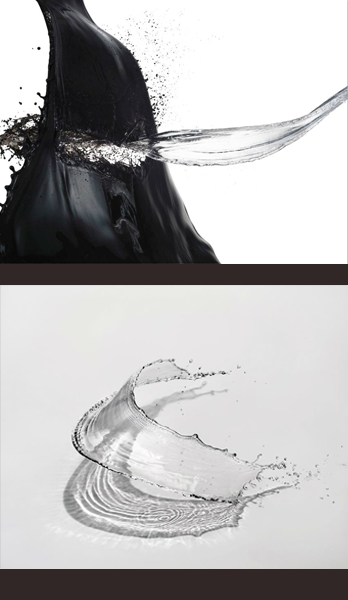 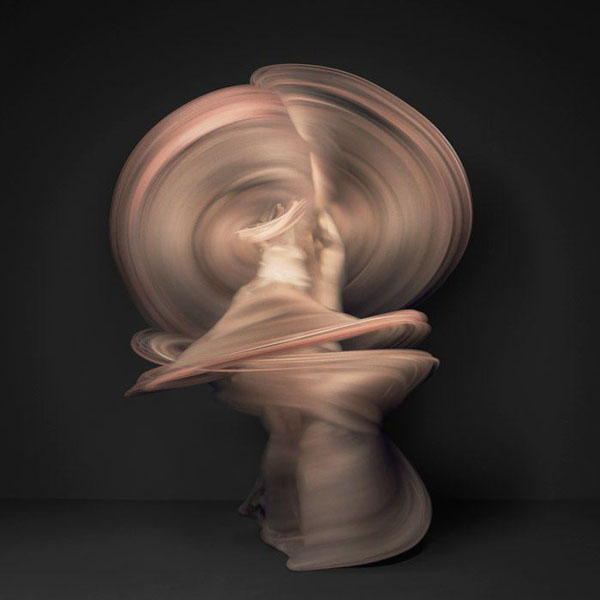 The resonance of Maruyama’s work with some light-painting-performance art is hard to miss.  And with the dreamy swathes made with slitscan photography.  A dialog among the three world-views would be worth hearing. 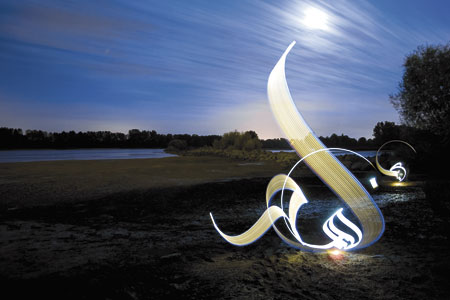 Light painting by Julien Breton, aka Kaalam     via emel 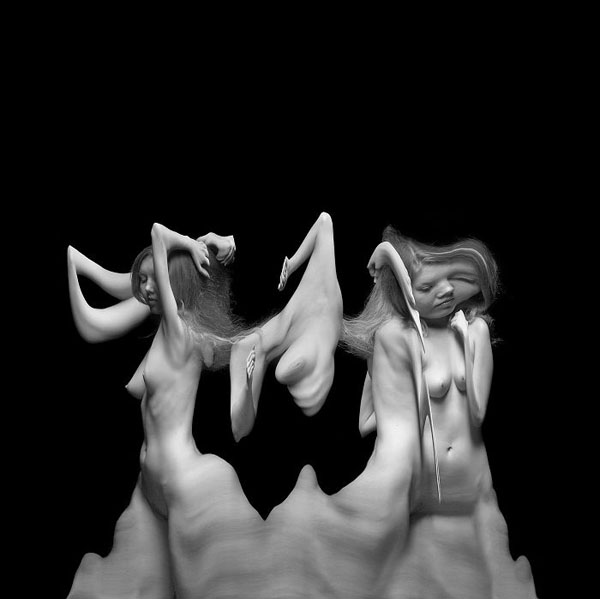 Shinji Turner-Yamamoto: Global Tree Project is a recent publication about an artistic enterprise we looked at in July.  The book cover depicts Turner-Yamamoto’s 2010 installation Hanging Garden in the deconsecrated Holy Cross Church, Cincinnati, Ohio.  I respect this artist’s struggle to speak in new languages, and to speak of us and of Earth. 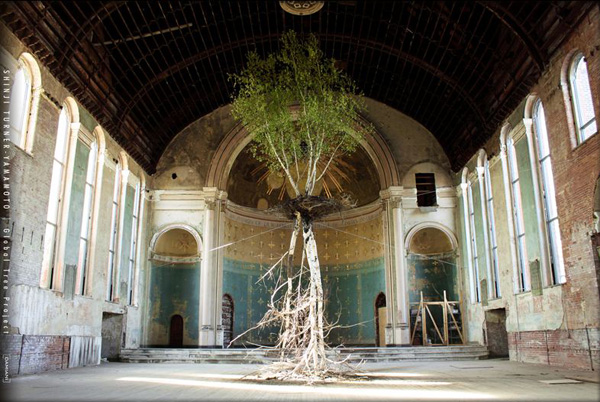 In 2012 he created an installation in Grand Rapids, Michigan called Sidereal Silence. It included audio and video —  I would love to have experienced how he handled his media.  He speaks about the installation below: 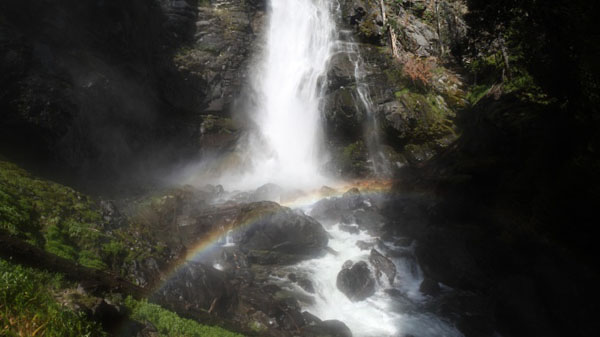 Last year in September in Grand Rapids I went to an underground gypsum mine to collect materials for my ArtPrize installation. I was with a group—the SiTE:LAB team, the curator and his students, and videographers. Yet despite their presence I still experienced instances of total subterranean silence and darkness and an accompanying fear and awe toward the unknown. I certainly could not comprehend my proximity to deep time embodied in this gypsum, formed 350 million years ago, or the inherent entity of the void. The minerals, especially their crystals carry a sidereal darkness and silence. My installation will be an homage to this silent and somehow sentient being, this mineral, this essential element without which our bodies can not exist.                     via SiTE:LAB

If you’re in the Cincinnati area there’s an exhibit at Phyllis Weston Gallery through January 31:
Paintings from Shinji Turner-Yamamoto – De Rerum Natura: On the Nature of Things

Turner-Yamamoto was first noted here in the blogpost Art in Sacred Spaces.  Also profiled were the British art duo Ackroyd & Harvey, who covered the inside of a derelict London church with living growing grass.  They continue their singular journey into art and nature with a commissioned project for Olympic Park in London.  History Trees will ultimately entail ten large trees of different species, each planted at one of the park’s ten entrances. 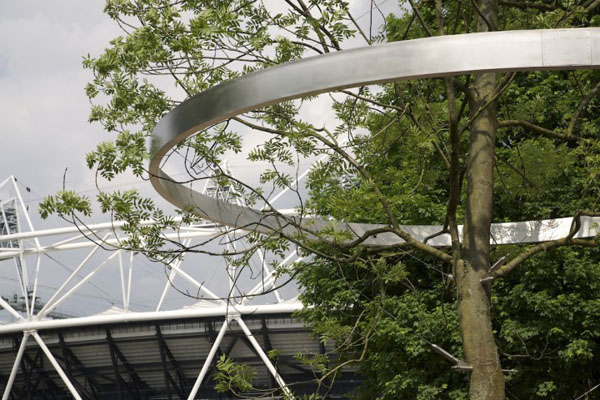 The ten trees will reach full maturity over the next 25-30 years reaching up to 18 metres tall… Three trees have been planted and will take root in time for the Games and the remaining seven will be planted post Games. Once planted, each tree will have a large ring, engineered from either bronze or stainless steel and weighing up to 500kg, securely suspended within the tree canopy with branches and ring slowly fusing together over time.

The rings will be six metres in diameter and engraved on the interior face with text capturing an archive of history from each location. The tenth tree – an English Oak – will hold a bronze ring inscribed with local residents’ recollections of the area. The shadow cast by this ring will be permanently captured by a bronze inlay on the ground, and each year the shadow and ring will momentarily align to commemorate a significant date and time during the London 2012 Games.            via Ackroyd & Harvey 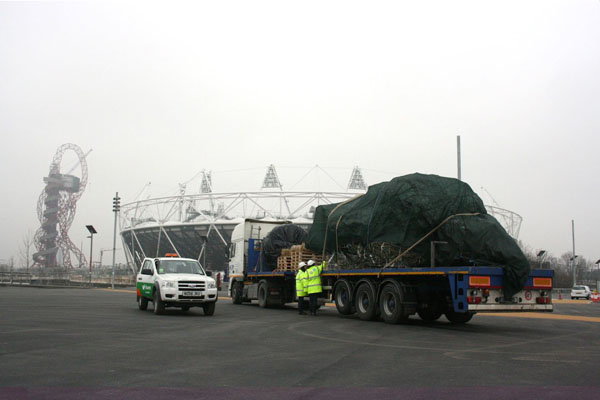 To understand the scale these artists work at — a photograph of the Fraxinus excelsior [European ash] tree arriving at Olympic Park, London. 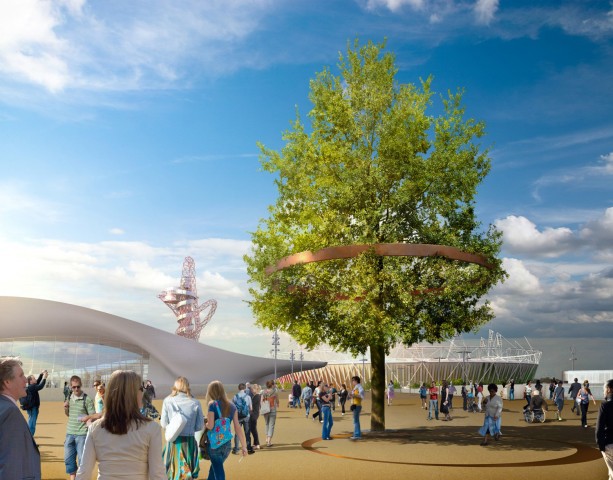 Visualization of the English Oak at Stratford High Street, London, showing the two metal bands — one in the tree, one in the ground.

Inscriptions for the first three trees are shown here on the Ackroyd & Harvey website.

The shortest day has come and gone, the calendar year rolls towards its end —

I hope you all have had delights and discoveries in 2012

and will find much to surprise and nurture you in the coming year. 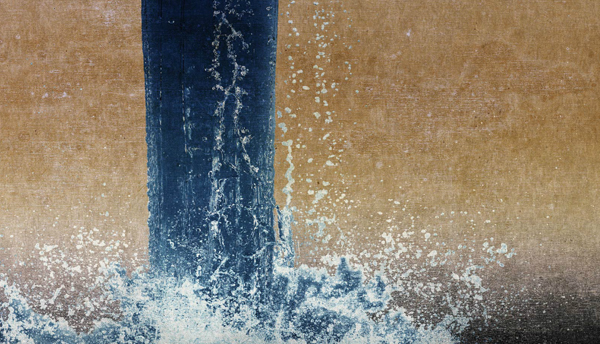 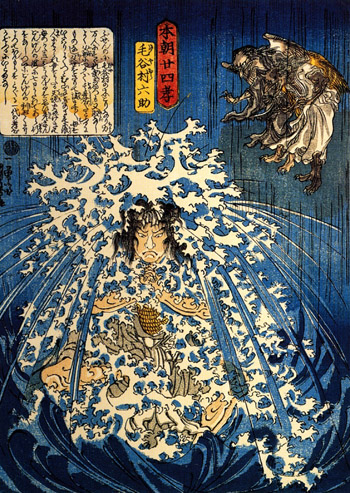 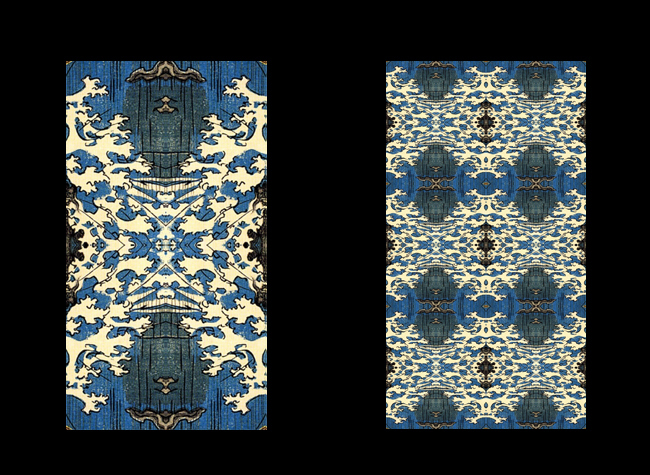 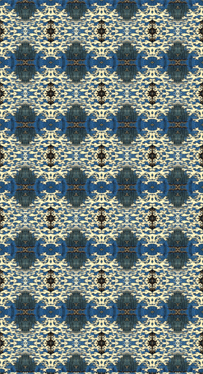 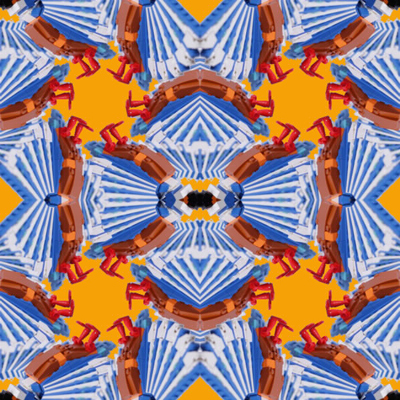 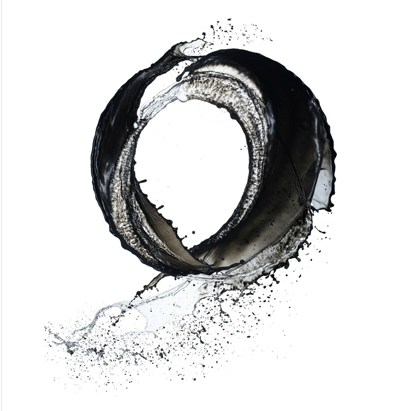 Fluidity.  Flow, gush, meander, mingle.  There’s something about freedom in a lazy curve.  Water  – like air, earth, fire – is an element recognized by the ancients.  Yet orange juice and motor oil are also fluids.  Different viscosities, different flows.  You slosh either around in a bowl and watch it move in signature fashion.  Fluidity is interesting on its own.

Above is an image by Shinichi Maruyama.  A friend sent me this artist’s website in response to my post on Ruslan Khasanov (May 17) and I was rapt moving through his work.  I urge you to visit his site and watch Water Sculpture Movie.  The gesture as he sculpts the water, the way the camera holds the moving water in jellied time.  Look at the stills on his site as well — my shrunken jpegs here don’t do justice to the beauty in his work. 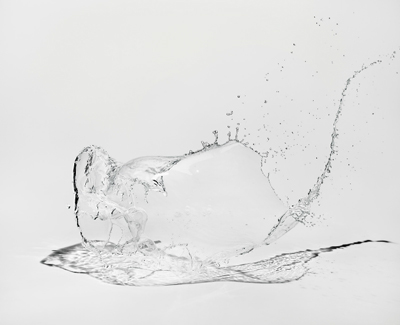 I don’t know why I have such connection with the notion of fluidity.  Maybe because I grew up within sight of the sea.  Until today I’ve thought the connection was with motion.  Period.

But it’s organic motion I love.  The fluctuations in how a certain amount of water flew through a certain roomful of air.  Science could no doubt plot just how those air currents were purling, whorling: the door opening into the room, a body approaches the table, loads hands with water, flings.  The follow-through of his hands is a dancer’s.

Science can enumerate conditions, connections, particularities.  I love it for this reason.  But science can’t have the emotion of beauty.  For this reason I love art.

Heinz Maier also photographs fluids with stunning results.  Compare this one with Maruyama’s at the top.  High speed cameras, similar fluids, both O shapes, unalike.  One’s about energy that comes from the shoulder and back, the other’s about a delicacy that it takes a macro lens to see and that a pinprick could kill. 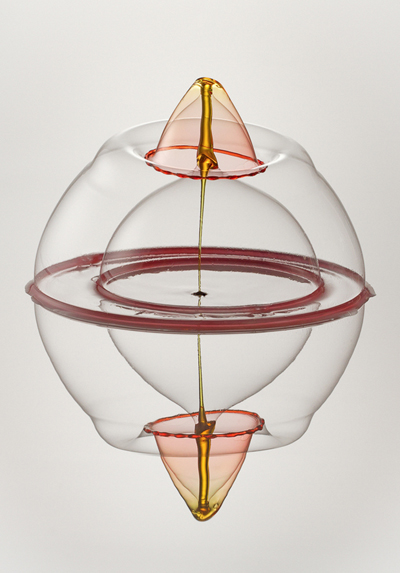 Bubble in the Hat by Heinz Maier (copyright the artist)

And how different the fluid motion here. 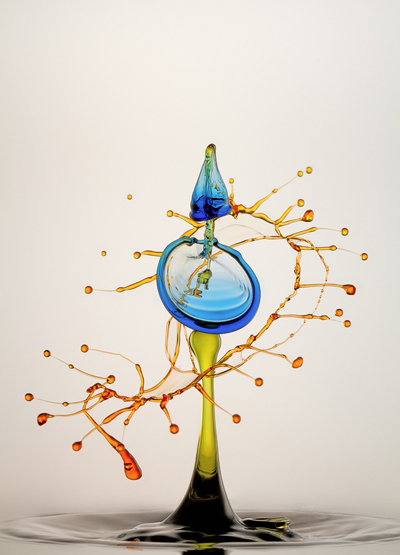 The New Way by Heinz Maier (copyright the artist)

In these images we actually see the language of fluidity.  Drip, splash, spurt, slosh, all verbs.  The actions of an inanimate substance of a certain character.  Organic, not pre-programmed.   Intentionally reactive with the circumstances of time and place.  Where I grew up there were oil derricks seesawing updown updown, squeak and groan.  Not what I love in motion.  A woodpecker’s rat-a-tat-tat includes the suchness of the tree, the sun’s heat, and how long it’s been since he last ate.

Lastly, how artists work.  I love that brash and brazen motion can conjure beauty the same as a lab set up to study a tiny scale of things.  Beauty is all around us, both artists have found a remarkable way to see it.   That finding is the artistry. 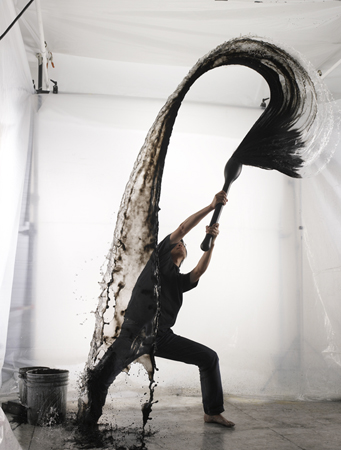 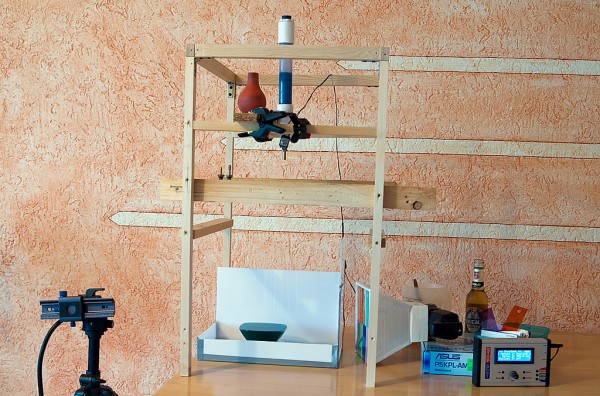 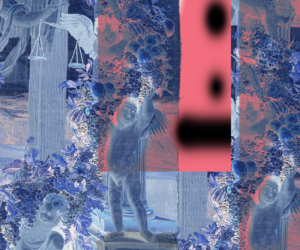 Every Other Week     So much time tending the website, so much less time creating the...read more →