3d is here.  Movies, games — artistic power.  To my readers who are artists and to those who care about fine art, here’s yet another set of tools that don’t have to be used to make schlock and pop.  To my readers who don’t give a damn about aesthetics but who want to have lots of fun — c’mon and jump in the pool!

I’m finally home, sick of traveling, filled with ardor for 3d.  Look through the following examples and see if you’re ready for it too.  This is a trail of images that started on the floors of the SIGGRAPH 2012 conference and has kept on going. 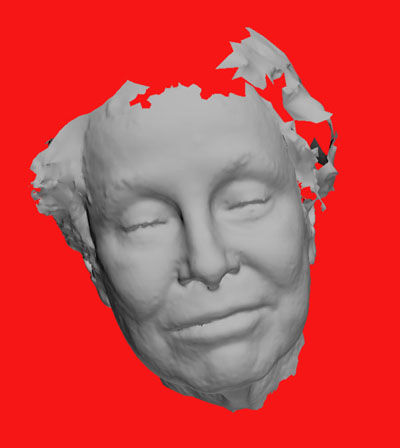 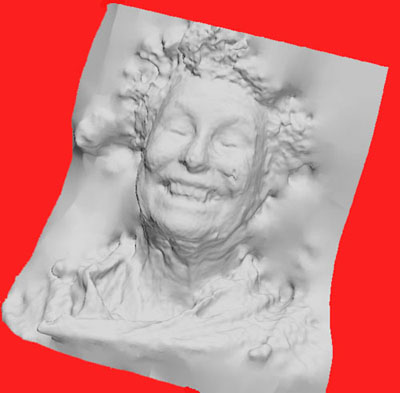 I took the 3d file from the 3dMD scan at top  and got it printed by MakerBot‘s 3d printer, The Replicator 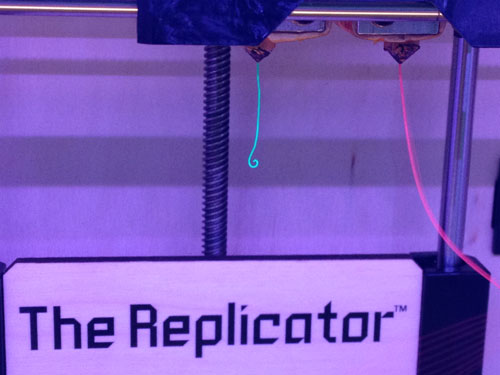 looking into The Replicator 3d printer during set-up

The pink plastic strand will slowly build into the model head you see below.  My scan had a flat back so the form built up from that but MakerBot certainly can print free-standing characters. 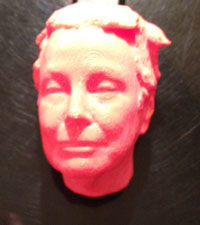 iPhone image of the MakerBot 3d print of me — resized  to about the same size as the real printed object. Funny, in your hand it feels bigger.         image copyright Sloan Nota

Later in the Exhibition Hall I spoke with a MakerBot competitor, Shapeways.  If you’re a fan of the Dutch visionary Theo Jansen and his Strandbeests you’ll enjoy that fans of his now sell small working models.  Jensen gets part of the profits.

After getting my MakerBot print I took it to be 3d-scanned by NextEngine.  This is a 3d scanner that you can use at home.  But pricey.

Because the model was a flaming red pink it was hard to read details.  The tech powdered it to make it more seeable by NextEngine — and you can see some of that powder in these images. 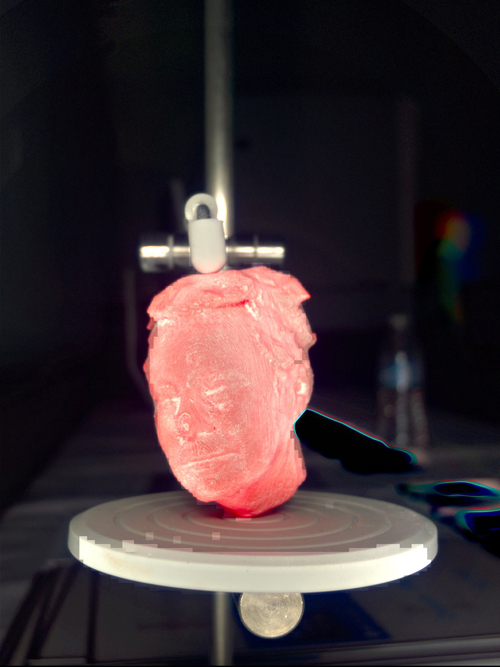 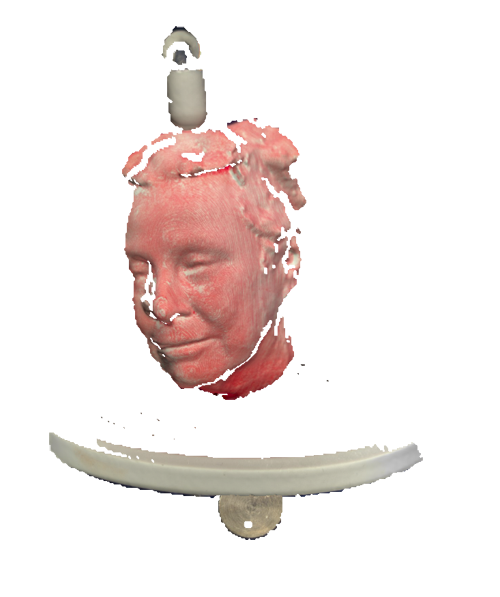 Both a photo taken as part of the NextEngine scan process and the corresponding digital model being built.

I got some other types of scans done at SIGGRAPH but I’m still attempting to open their more exotic file formats.

Finally brought my MakerBot head home and put it on an old-tech flatbed scanner.  Cranked it up to 1600 dpi to show surface detail.  Still some traces of that powdering. 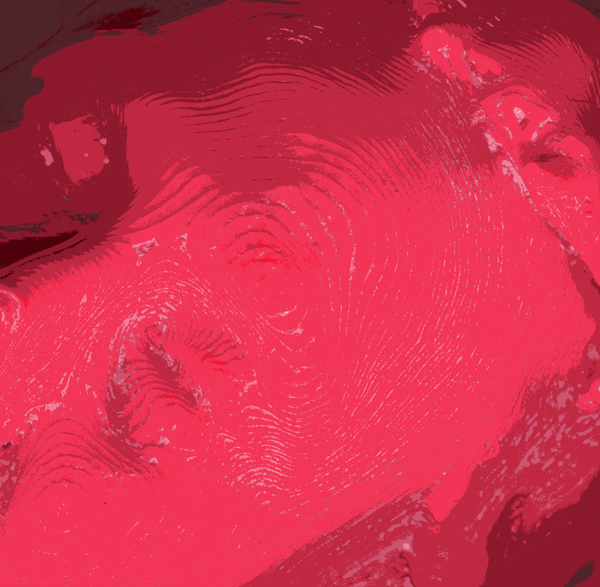 The first view shows you how the layers as the form built up, the strata (vertical here but horizontal as it printed).  The second image shows you some of the model’s top surface, swirling terraces like eroded landforms, where the printer was following the natural curvatures of the face.

Notice how many flavors of image we now have in our basket?  That chain of images and objects can go on.  On.

Here are some examples of me playing with these files in Photoshop CS5’s meager 3D engine. 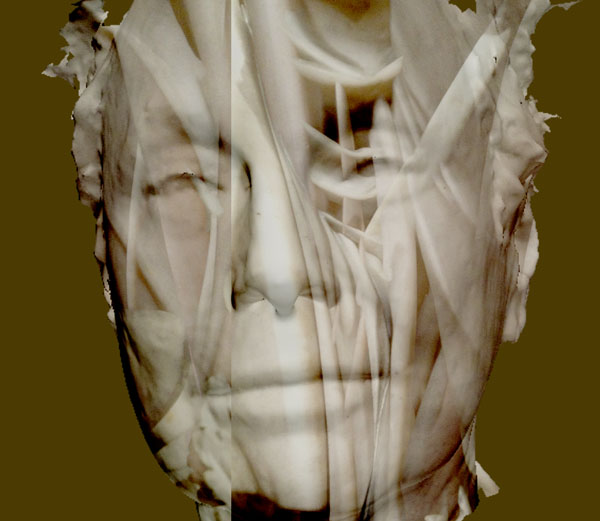 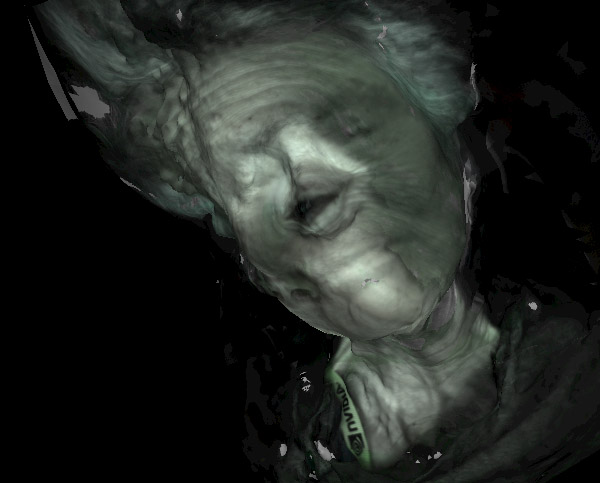 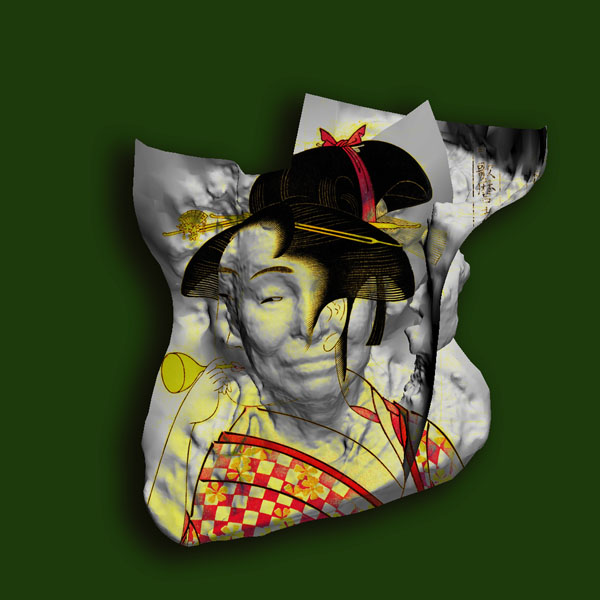 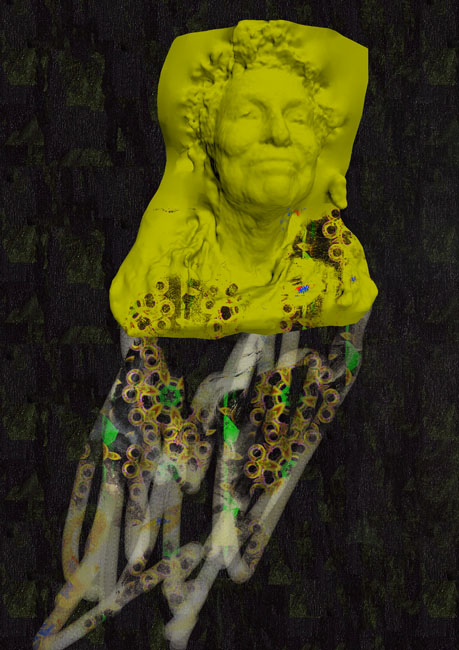 Are you ready to play?  Here’s a starter list, far from comprehensive.

•  Want to get it printed?  Be aware that you can buy a 3d printer such as The Replicator or you can go to one of the online 3d fabricating services.  Two are: