Part of a going-away tribute to advanced.aviary.com‘s Peacock 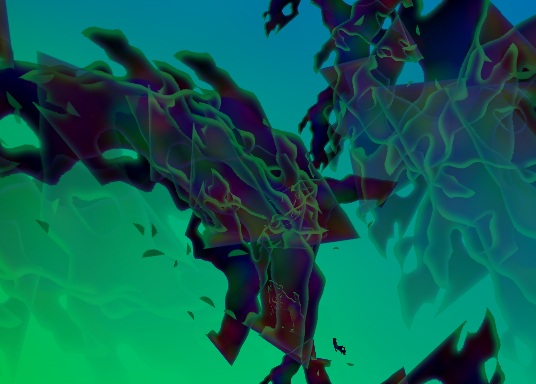 [The topic yesterday was the Shape Draw function in advanced.aviary.com‘s Peacock.  Another artist on Aviary, stevek, uses Shape Draw very differently than my examples can show — so I asked him to provide some of his work and to write a bit about the Peacock sub-tool that he knows better than anyone else in the community.  Full disclosure: Steve is a longtime beloved friend as well as being an artist who found his voice on Aviary.  Below is what Steve wrote.]

“More than fifty years ago I got the clear message from my art teachers that art was not going to be in my future.  I just couldn’t draw draped fabric, had no sense of balance, and should realize that the best I could hope for might be to learn how to appreciate art.

“Fast forward half a century and I’m exploring the Virtual Reality world of Second Life. That whole world is built by its inhabitants and so I thought I’d give making things a try. Guess what?  The things I’d always imagined but couldn’t get down on paper were simple in the virtual world. I made all kinds of stuff.” 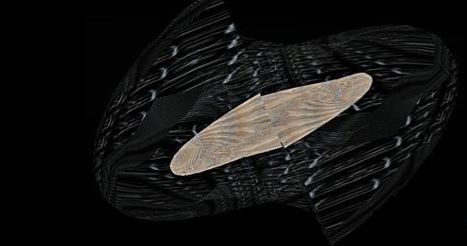 A wretched image of one of stevek’s huge Second Life sculptures, which you could enter and look out through the filmy patterned walls or view from outside in a very different way.  The sculptures featured complex motions as well.

“I was so excited that I showed Sloan because I figured that as someone who works in electronic media she’d want to know about this. After telling me that she liked my work she insisted that I had to see this thing called Peacock.

“Second Life started revealing the truth behind the lie that I would never make art.   I popped in to Aviary for a visit. Four years later it’s coming to an end but it’s changed my life. What changed my life most was Shape Draw. I’d never seen anything like it. Nobody had ever described anything like it. It was so unusual that even as I learned it I had a hard time explaining it to others.

“In grade school and high school, teachers talked about building from basic shapes. I had no idea what they were talking about.  All of a sudden Shape Draw showed me how to take a few basic shapes and lines and turn them into … anything.  I started playing with circles and spirals. But then I found that I could change things, distort things.. that all of a sudden my simple spirals and 60s type psychedelic blobs could turn into stuff.  Into landscapes. Into dreams. Into visions of thing not seen …. Not even seeable.

“I’ve always loved poetry and often wanted to find a way to respond to it with some other creation.  But what can you do if you know that you’re not an artist?  But using Shape Draw I found myself able to put into visual form my responses to the poetry that moved me deeply. 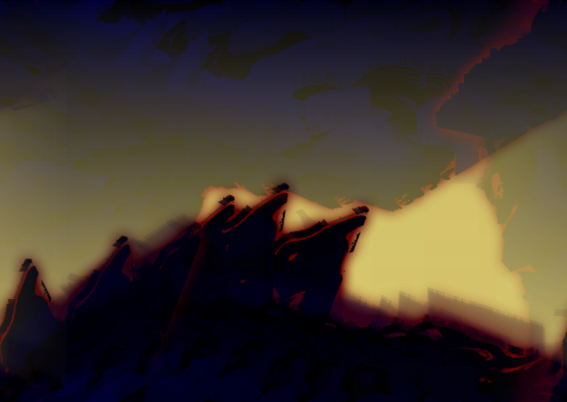 “Yeats’s question at the end of The Second Coming, “… and what rough beast, its hour come round at last/Slouches toward Bethlehem to be born?” had been rattling around my mind since I first saw it in high school. It’s a troubling poem about troubling times and it ends with a troubling image.

“Using Shape Draw to push and stretch my responses to that question brought forth a piece that allowed me to respond to Yeats, to express a response.  It’s been well received.

“Watching the horror of the Japanese Tsunami left me speechless. But Peacock, and mostly Shapedraw, helped me bring my feelings out into a visual form. The same thing happened with the Gulf Oil spill. Unspeakable sadness and anger came out, again through Shapedraw, as a whole series of oil spill related paintings.

“Shape Draw isn’t just for pulling out dark images. It’s a tool for making anything. I think that Frail Deeds Dancing (although created in a moment of grief) is light and playful. A silly and rather sentimental piece that I did in my early Shapedraw experiments got the title Welcome. I’ve just had a request to donate it to a residential center for homeless kids. They chose it because it makes them feel good. I’m glowing with happiness that I could make and give them such a gift. And it’s due to Peacock and mostly to Shape Draw.”

[In response to the demise of Peacock stevek posted his illustration to the following poem by Constantine P. Cavafy]

Engulfed by fear and suspicion,
mind agitated, eyes alarmed,
we try desperately to invent ways out,
plan how to avoid
the obvious danger that threatens us so terribly.
Yet we’re mistaken, that’s not the danger ahead:
the news was wrong
(or we didn’t hear it, or didn’t get it right).
Another disaster, one we never imagined,
suddenly, violently, descends upon us,
and finding us unprepared -there’s no time now-
sweeps us away. 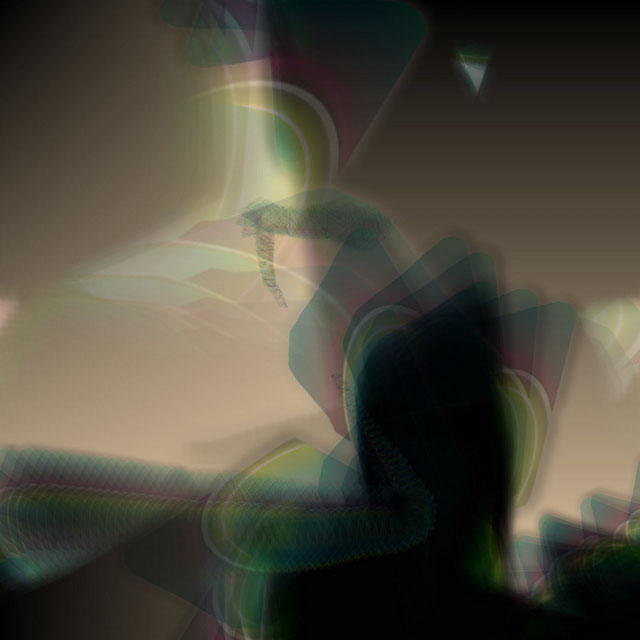 [After eye surgery yesterday — happily a success — bed is an important destination.  Your weary blogger will have another eager go at it tomorrow.]

To be continued….
<< Older Articles

Day 4 of a going-away tribute to advanced.aviary.com‘s Peacock 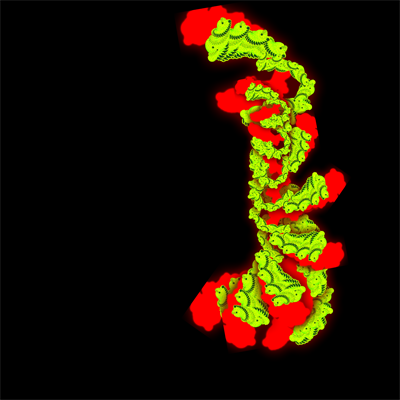 Bet you wish you had a tool that could draw like this — just one of Peacock’s sub-tools, Shape Draw. The fluency and flexibility are miles beyond Photoshop’s reach.  More examples? 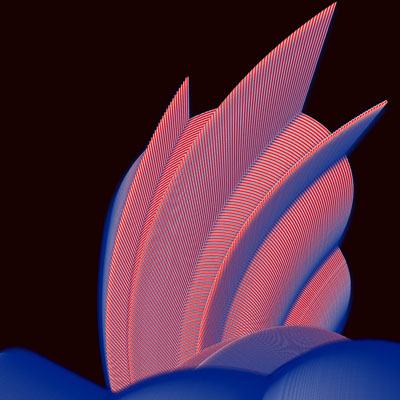 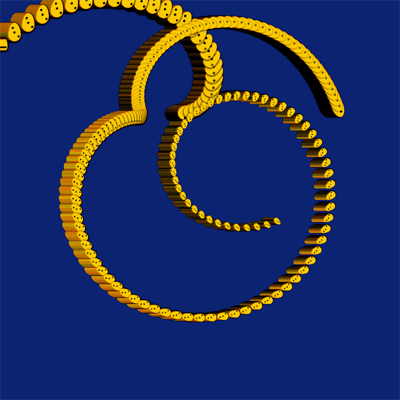 This Bluebird of Happiness feather was a technique breakthrough for me.  I wanted to keep the look of individual barbs going up the feather shaft but also wanted them to taper.    Shape Draw includes controls that let you specify length, angle and much more. 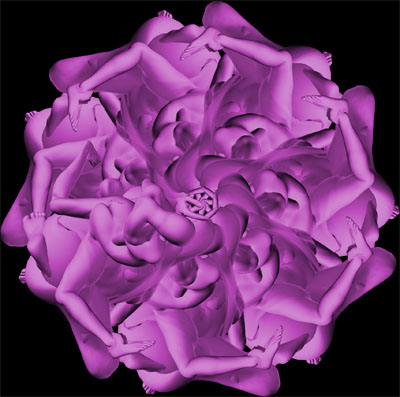 I’ve used Photoshop’s move-and-replicate feature.  Each iteration requires key commands, and to change direction, scale, spin also requires a dedicated maneuver.    If I’d had to hand specify each barb on the feather…  I would’ve made a blue balloon.

And Shape Draw has other ways to play.  Four ways to array a single ring that was striped with gradients.  Patterning, 2d design effects, exciting surfaces. 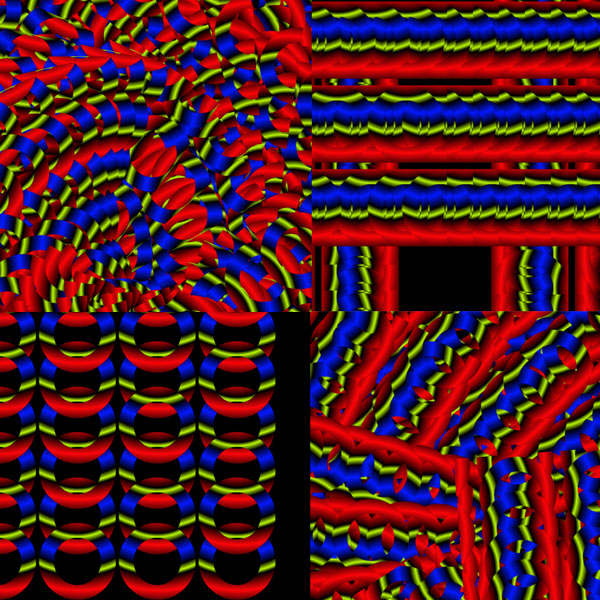 Shape Draw is irreplaceable.  When Peacock goes you won’t find this powerful playful tool anywhere, not anywhere at all.

Today through September 15th when Peacock, and the rest of advanced.aviary.com including its community will disappear.