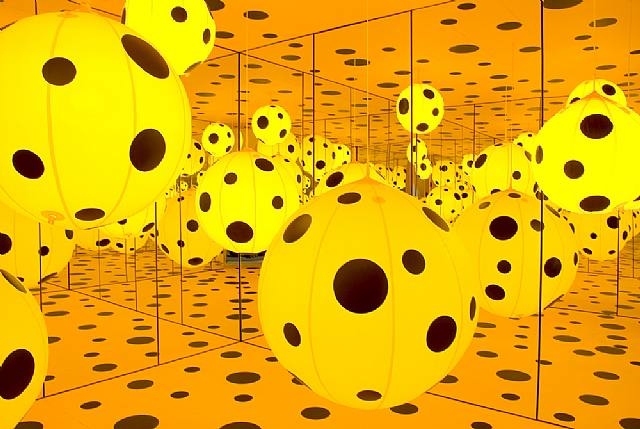 I saw two artists Friday that held a kinship.  First was Yayoi Kusama at the Whitney Museum.  The lady of the dots.  She was trained in Japanese traditional painting techniques, came to New York in the 1950s and became a fixture in the avant-garde.  Even then she was experimenting with dots.  In the 1970s she returned to Japan and ultimately developed psychiatric problems, so she rather pragmatically willingly entered a hospital where she’s lived ever since.  And continued to be fertile in her artmaking. 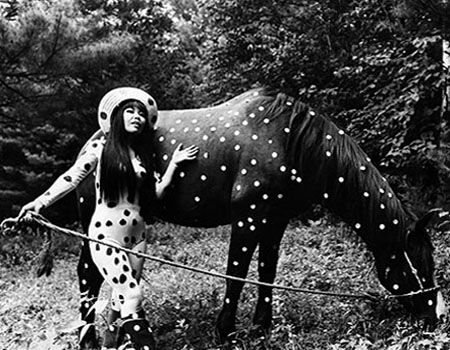 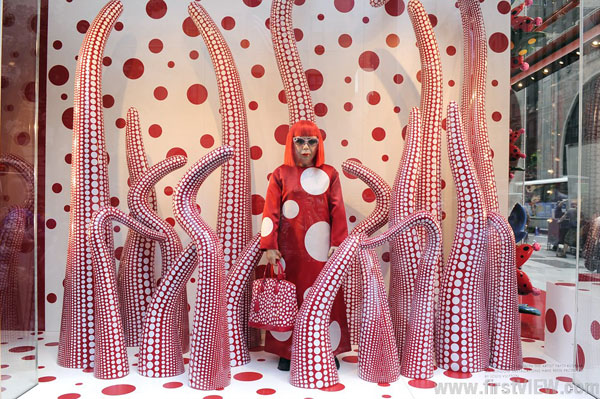 I was impressed at the Whitney show with Kusama’s striking experimentalism, her wild imagination, her will to create.  Above you see her posing in a window display among the soft sculptures she pioneered years ago.   Claes Oldenburg is among those she influenced.

One thing that strikes me with Yayoi Kusama’s imagery is the seemingly obsessive-compulsive rigor with which she repeats her dots in increasing/decreasing scale.  It’s very reminiscent of old netsuke carvers’ skills in repeating and modulating a repeat pattern.  Always a jaw-dropper for me, the patient precision that stays focused til it’s done.

My eyes tried to follow a few of the snaky forms in Yellow Trees but they kept getting lost.  I fantasize that the artist’s intense focus allowed her to keep the individual strands in mind as she worked.

The artwork is rife with sexual improvisations, some overtly stated and others simply presented in plain sight. 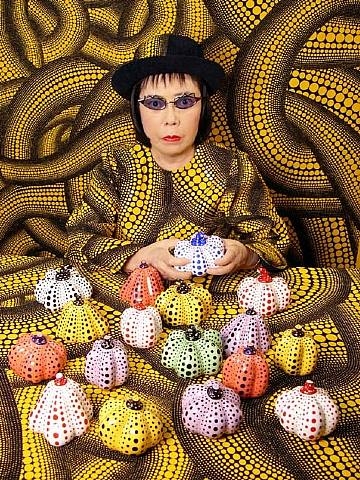 Pumpkins by Yayoi Kusama     via artnet 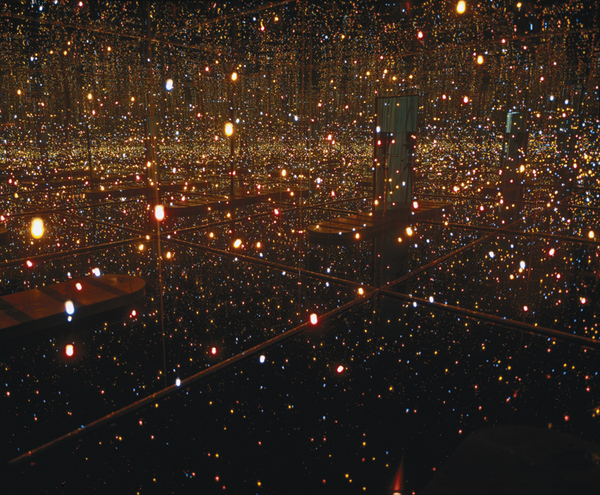 Fireflies on the Water by Yayoi Kusama     via The Whitney

Wikipedia has this (unattributed) quote by Kusama.

One day I was looking at the red flower patterns of the tablecloth on a table, and when I looked up I saw the same pattern covering the ceiling, the windows and the walls, and finally all over the room, my body and the universe. I felt as if I had begun to self-obliterate, to revolve in the infinity of endless time and the absoluteness of space, and be reduced to nothingness. As I realized it was actually happening and not just in my imagination, I was frightened. I knew I had to run away lest I should be deprived of my life by the spell of the red flowers. I ran desperately up the stairs. The steps below me began to fall apart and I fell down the stairs straining my ankle.

Which I find fascinating given the artist’s numerous infinity-room artworks such as Fireflies, above.  The artist has chosen to face her fears, or had already faced them, she to recreate this experience in so many ways…

At the Whitney you get 60 timed seconds inside the artwork.  A chamber of mirrors with multiple lights dangling all around you.  My response was wholly personal. a delicious sense of homecoming — I grew up looking out over LA.  Then I noticed that the lights dangling on either side had loose rubbery connectors so I lightly batted one — which swayed off into the room’s infinities.  I fear lest I incite some baboon to more rambunctious play, but I gently infinitized the fireflies for the remainder of my minute.

A guard commented that you could feel Kusama’s need to be obliterated but I disagree.  Part of what I love in this artist is her lifelong sense of humor and wicked play. 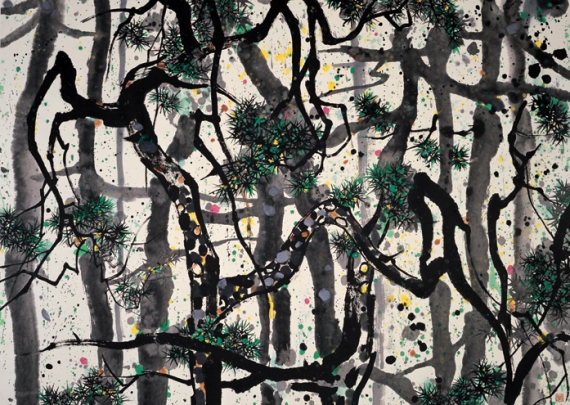 If Kusama uses dots,  the Chinese painting master Wu Guanzhong uses splots.  I hope this is a sufficiently respectful way to point out that unlike Kusama’s scrupulous circles, Guanzhong animates his canvases with wildly free variants of this basic shape.  Big splots, teeny splots, wielded with wonderful abandon and abundant control.

Guanzhong died in 2010, aged 90, yet I have trouble writing about him in the past tense.  His canvases cavort with life and a love of subject matter.  You feel he’s got a way to reveal its suchness outside any tradition of realism. 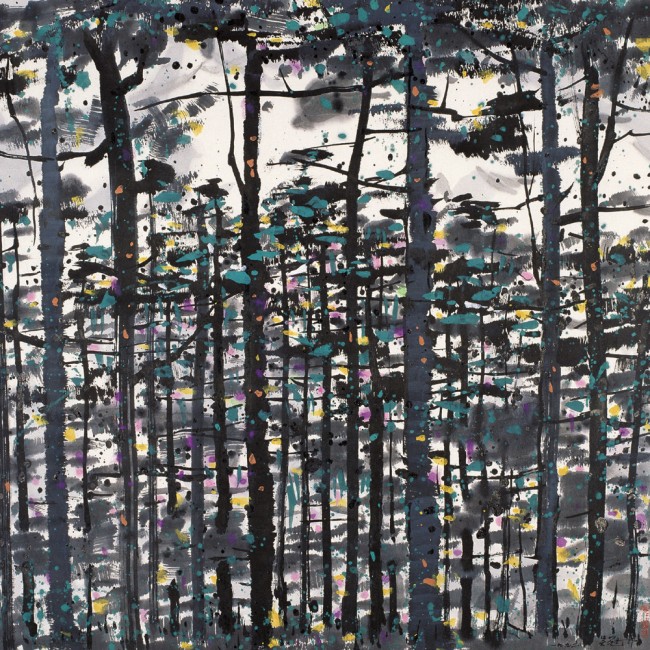 pines by Wu Guanzhong        via chinaonlinemuseum 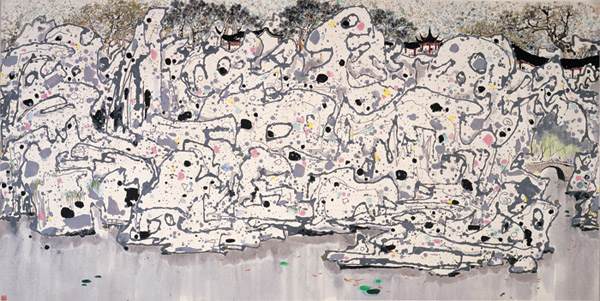 Guanzhong also employed a dramatic level of contrast between his larger shapes and the smallest dot clusters that embellish his surfaces.  There is little tradition in Western art for a level of zoom this extensive.  For a cultural comparison imagine the painting below being a nativity scene by a Renaissance master — the manger would be the stone building at bottom right.  Mother, child, Joseph, magi, shepherds, livestock all dwarfed by a larger reality. 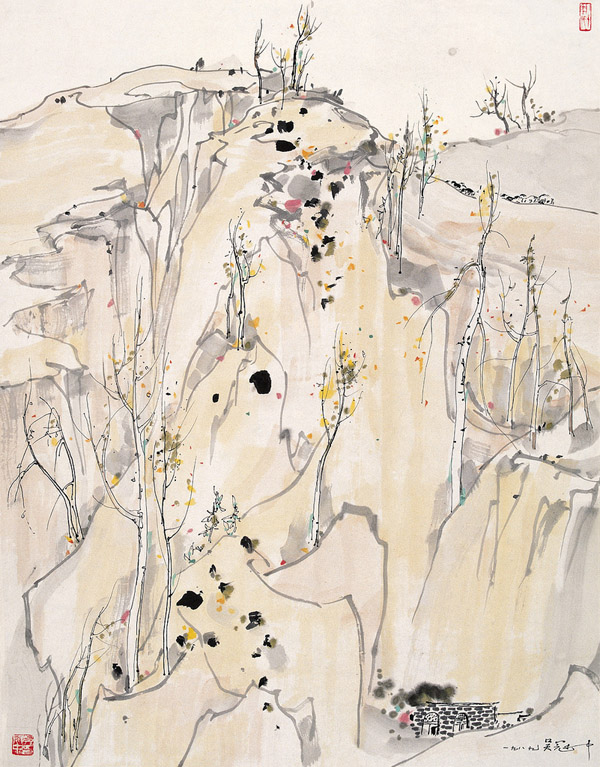 And Guanzhong sometimes painted animals.  I love many of them and include a couple here. 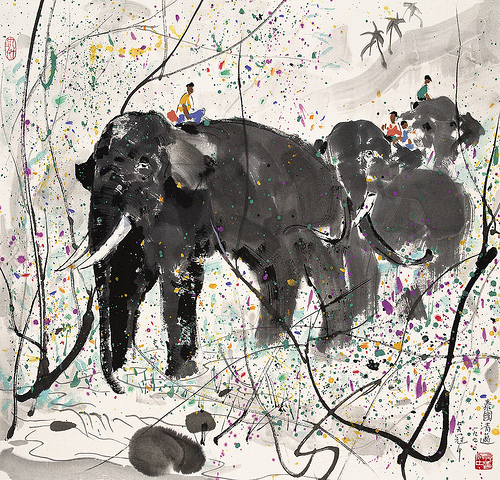